Stumbling across the biopolymer zein

It is hard to find time to hare after all of the potential research directions implicit in the Reprap undertaking. As a result of that, I've tried to concentrate on just a few areas dealing with the increase of the printed percentage of Reprap machines. Yesterday, however, I got off-track for a few hours.

For some reason I found myself looking for the Wikipedia entry for bioplastics and serendipitously keyed in biopolymers instead. There, I ran across a reference I hadn't seen before about a biopolymer called zein.  The article referenced an incredibly detailed review of the material concentrating on its extraction written up a few years ago by John W Lawton at the USDA laboratory at Peoria in Illinois.  Apparently, there is a large collection of zein related articles there which served as the basis of Lawton's extensive article.  A few things about zein jumped out at me.

The biggest was that it was a protein, biopolymer which used corn gluten meal, a rather useless byproduct of the corn milling process.  Corn gluten meal is a non-nutritive waste product that is typically used as a bulk agent for cattle fattening.  It also has developed a small reputation as an "organic" herbicide for home gardens.  This last is important because it means that 50 lb sacks of it can be had by ordinary people in one-off quantities at prices of under $1/lb.  What that implies is that corn gluten meal is basically free and that what you are looking at is mostly the packaging, warehousing and transport cost when you purchase it.

The second was that reading over the Lawton article that the most successful extraction methods were achieved with kitchen chemicals {rubbing alcohol with a touch of lye} and chemistry.  As well, zein has a long history of being used as a plastic, coating and, interestingly a fibre.  This last I will talk about a bit later in this blogging.

Zein was used extensively before being displaced by petroleum-based substitutes during the 1950s and 1960s.  Currently, ready-to-use zein is quite expensive {~$10-25/lb} not because of its intrinsic cost but rather because its very limited market, viz, food grade coatings for pills and food products commands such prices due to its highly regulated nature.

I vaguely remember from my childhood a wool substitute fiber called Vicara which emerged in the 1950s before being replaced by synthetic, petroleum-based fibers a decade or so later.  What shool me about the Lawton article was that Vicara was made from zein.  The rather high softening temperature of Vicara {~245 C}.  If the melting temperature of zein is anywhere near this a whole range of products like coffee makers and the like become possible.  Using PEEK instead of PTFE for thermal barriers in extruders, something that we are already beginning to do regularly, ought to let us get by with that.

Oddly, zein's glass transition temperature is very low {~40 C}.  It may be that like PLA, zein has no real warping problem during printing compared to petroleum-based polymers.

Heretofore, our use of plastic filament as feedstock for printing has caused practical problems when mapped against our desire for a recycling scheme for plastic.  With recycling we have to grind the waste plastic, a problem that appears to have been solved recently.  Afterwards, we have to extrude the filament.  The machinery for doing this extrusion is relatively complicated.  Sadly, you can't just extrude filament.  After it is extruded you have to quench, reheat and run it through a series of godet stations before you can spool it.  This videoclip gives you a fair notion of the complexity and scale of the process. It seems to me that scaling down that sort of process is going to be an undertaking much more complicated than the Reprap printer

The notion that zein was made into fiber coupled with the application of electrospinning to zein fibres led me to quite a new idea.  What would stop us from using spun fiber instead of monofilament in our extruders?

Electrospinning can be achieved with very simple apparatus such at this piece of lab equipment made in New Zealand.

Spinning the filament into thread of the proper diameter is an old, old technology easily scaled to our application.  This Indian charkha shows how simple the technology can get. 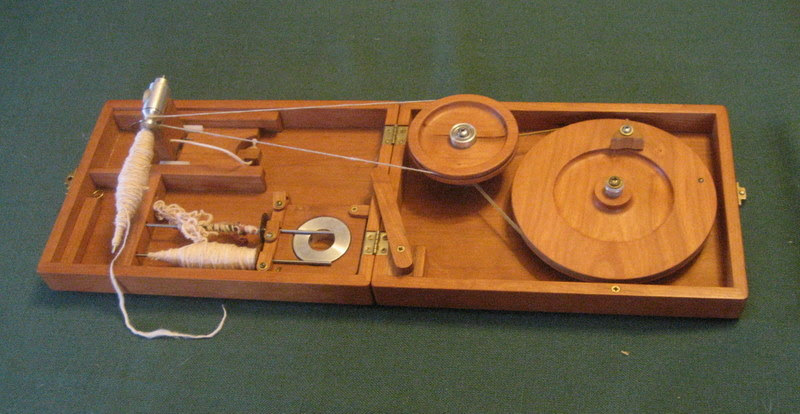 Filament is useful in our extrusion technology because it is stiff enough to be forced into our extruder barrel under pressure.  Obviously, fibre thread can't.  Keeping in mind, however, that our thread is polymer, we should be able to draw it through a heated die to consolidate the fibres into a single polymer mass.

that was interesting i wonder if it will go any where

There are a number of steps that can be taken to assess the feasibility of zein. The literature I've seen in fuzzy on what its melting point is and similarly on experience with extruding it.

It would seem reasonable to acquire a small sample and determine what the actual glass transition temperature, softening point and melting point are.

Should the results of that be promising then acquiring a test batch and having it turned into enough filament so that one of better and more obsessive research types like, for example, Nophead or Bogdan, could assess it for viability in our extruders.

Should that be promising it would be then worthwhile to see if we could batch the Carter and Reck patent {1970} to get usuable zein. I think the critical question there is how much corn oil we can get by with in the final product. With a single stage we get 2% according to Lawton. If we want less than that we have to multistage the process.

I have a feeling that the popcorn smell we are getting whilst extruding PLA currently is occurring because of corn oil content in the PLA filament.

Hmmm... I may be able to short circuit those first two research questions. :-)

what sort of issues would high corn oil content cause in this context?

I actually don't think that it would make much difference as long as it didn't get completely out of hand. At various times we've put a bit of oil on our ABS filament to ease its insertion into the extruder. That seems to help unless you get crud forming from overheating the oil in the extruder. That jams your extruder orifice.

What I am keying into is the common observation that printing with PLA makes a smell like you get when you make popcorn. :-)

For me research should start with, can we design and publish a reliable cost effective process to make it in the average home kitchen.

If it is biodegrade-able then recycling is simply put it on the compost heap.

Bio-Diesel is so do-able because Joshua Tickel et al published the DIY at home method.

Conversion of raw polymer feedstock into filament is for me another discussion. Simply because if we can get that far then the question becomes doe we do filament or do a hopper fed design.

The techniques needed to turn polymer feedstock into filament is arguably overkill as the method to use raw polymer must be subset. So why do filament.

Given enough demand a commercial producer may produce cost effective filament, the demand needs to be created first though.

I take your point though that knowing in advance if the polymer produces the results we need would be advantageous.

I worked with Mr Lawton. He has left the USDA and is working for a company trying to commercialize zein extraction. E-mail me if you would like his contact info.

Hi guys,
Thanks for this Blog Forrest, you're on the right path for sure. I've just got into this (so am 7 months behind) but am so keen to see it work please are there any updates?