Got the perimeters going

I wanted to do a direct translation of my XML format to gcode instead of breaking it into perimeters and infill as I had it before. The way I did it previously worked fine as long as you only wanted the possibility for one kind of infill. I'd like to a little better than that this time. 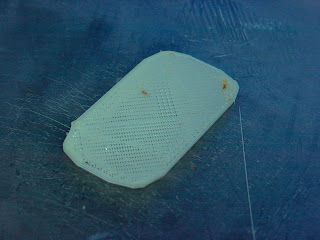 I've got a bit more work to do getting the ends of the infill to match a little better with the perimeter, but for now it is working pretty well. The brown bits are fried ABS that fell off the extruder head.  I should have cleacked to see that it was clean before starting the print.

You can see a little misalignment of the perimeter of the raft. It turned out that the grub screw on the stepper side of the y-axis had shaken loose. Fifteen minutes of fishing around in the pocket in the acrylic assembly that it had fallen into with a hemostat recovered it. Once reinstalled, the misalignment disappeared. :-)
Posted by Forrest Higgs at 5:53 PM