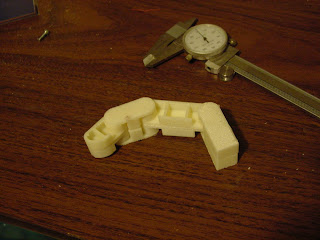 As you can see with this telepresence 'bot finger, I think I am getting pretty good results.
Posted by Forrest Higgs at 9:58 AM 4 comments:

In which your narrator harks back to his youth and fingerprints ruined by trimming plastic flash off of model airplane parts with double edged razor blades.

I have an aversion to infills. Recently, I realised where the aversion came from. During the 1950s you could buy plastic model airplane kits for $1-2. These were made with injection moulded parts that came on little flat plastic Christmas trees. Exacto knives in that era were both expensive, for a child at least, and the blades dulled quickly and were largely beyond the ability of a child to resharpen. As a result, this child nicked paper-thin double edged razors from the medicine cabinet to trim the parts off of the tree and trim the flash off of the parts.

That worked fine, except for the cuts which the blades would make on ones fingertips which eventually grew into permanent scars. That was no big deal in those days.

Having trimmed your parts you glued them together with Testors or Duco cement {ethyl or butyl acetate} and, with a bit of paint, you had a lovely airplane to hang off of your ceiling by a thread and dream about flying.

Early on in the Reprap project, we used Solarbotics gearmotors. When you opened one of the gear boxes of, say, a GM-3 you found that the housing had been made using the same injection moulding process that model airplace manufacturers used. With a working Reprap printer I quickly began to loathe the clumsy, infilled parts that we were designing. They wasted both time {to print} and filament as well. Worse still, one tended to stick the parts together with expensive nuts and bolts.

Why not make parts that fit together like the old model airplanes?

The trick there is that the old model airplanes inevitably had a left side and a right side or a top a bottom that were often simply mirror images of each other. This weekend I was design a finger tip with left and right sides. I had designed the left side and got it working acceptably and was going back to do the right side in Art of Illusion {AoI} when it occurred to me that it would be much simpler to just write a script to swap the sign of the coordinates of the axis that I wanted to mirror around. Writing that script took about five minutes and saved me a lot of time in redesign and reprocessing of the resultant STL since my script operated directly on the Gcode.

Printing the two halves was trivial. 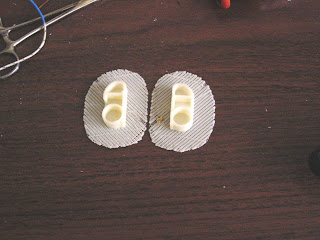 It took a few moments to scrape off the raft and a few drops of cement to finish the part. 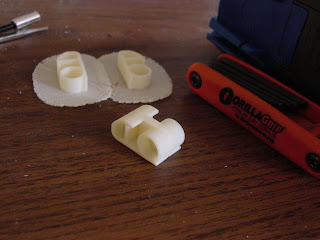 The result was an elegant looking part that would have been a right bastard to design and print conventionally.

While I've incorporated this simple mirroring script into my own Slice and Dice STL processing software it would be no big deal to incorporate it into the more widely used STL processing routines available to Reprappers either open source or commercial.

Slice and Dice is pretty much working now. I'm not completely happy with how the infill and the perimeter prints hook up, but that's mostly parameter tuning. I'm debugging Slice and Dice while I am designing a robotic hand. Here is the distal phalange {finger tip} that I've done for a first try. 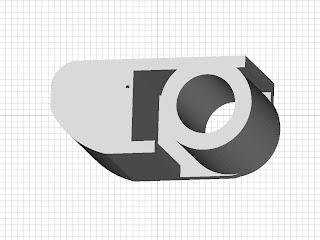 I've left out the infills in that they are not necessary.  Here you can see the first print that I am happy with. 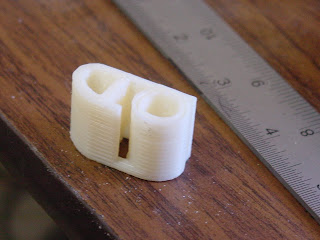 I've really got to break down and find a camera that can do better closeups for small objects.  My periodontist uses one for photographing teeth, an Olympus, which might be the ticket.  I may well buy one after my quarterly tax payment is done towards the end of this month. 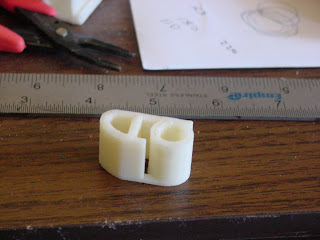 As you can see in this second pic, there is a separation between the outer and inner print road for the flexural axis.  I've got to reduce some the outer radius there or lower the extruder flowrate and go for three print roads instead of two on that part of the print.

Posted by Forrest Higgs at 2:01 PM No comments:

Got the whole Slice and Dice ensemble running together last night and did some test prints. Vectorization cured up the extruder head slowdown completely for curved print roads. Sweet! :-D
Posted by Forrest Higgs at 8:21 AM 3 comments:

I was able to put the final touches on the Slice and Dice upgrade last night. The app is operational again. Now I can get to work on that telepresence hand project. :-)
Posted by Forrest Higgs at 6:05 AM 1 comment:

In which a very kind Adrian Bowyer takes pity on your narrator.


In my last posting on 21 June, I laid out a method for vectorizing a pixel-defined perimeter. Having read the posting, Adrian Bowyer, a published expert on this sort of thing, took me aside and showed me how to do the vectorization efficiently instead of just at all, the solution I came up with.


Using Adrian's approach, I was able to achieve my goal of getting exact vectorization of the print road and push out the average segment length to well over the 0.3+ mm that was required to assure a print head speed over the major axis of at least 16 mm/sec.


You can see an example of such a vectorization here.  All values, save the last, are in tenths of a millimeter. 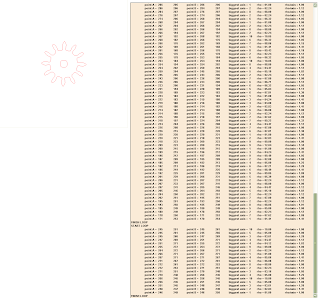 The last value in the listbox, "rho/axis" should allow me to adjust the print speed on the fly in G1 statements to assure a constant head velocity for print road segments greater than 0.3 mm in length.


I should be printing ABS parts again by this weekend, which is good since I want to redesign and print one of these.