Sampo: The return of Darwin... 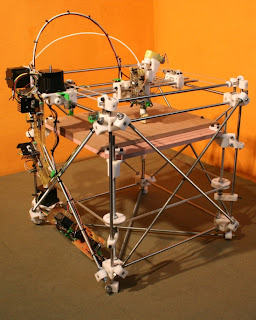 Despite all of the hoopla about Mendel, a very robust Reprap machine which is virally spreading like a bad flu, Darwin derivatives have been quietly building up numbers largely through Bits From Bytes' Darwin-derived Rapman printer.  It would be fairly safe to say that there are upwards of two thousand of these Darwin clones of one flavour or another in the field. 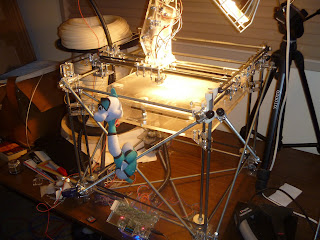 Rapman is basically a Darwin re-engineered for laser cut acrylic plastic instead of printed parts.  I've never been able to decide whether Rapman is a crib of the Ponoko laser cut acrylic Darwin or vice versa. The Rapman was a brilliant choice for me.  I had been working on a series of Repstrap systems.  Early on in 2009 I realised that getting Tommelise 2.0 printing was going to take another half year at the rate I was going and what I really wanted to do was design things with a 3D printer in the design loop.  I saw Batist Lehman's video of his Rapman in action and was sold.


Of course, Rapman has its little ways.  It arrived disassembled as a flat pack.  Inside were several sacks of metric nuts and bolts heavy enough, if put in a sock, to serve as a very effective cosh.  Assembly was a daunting task and once finished there was a strong sense that you don't want to fool around with it for fear that it would break or some apart.


I was puzzled at first that lock washers hadn't been included with the nuts and bolts.  It quickly became apparent, however, that if you put enough torque on nuts to make a lock washer compress the high impact acrylic that Bits from Bytes used would shatter.  The net effect of this was that I keep a bowl beside my Rapman to collect the constant drizzle of nuts and bolts which unscrew themselves and fall on my work table.


Since then I've put well over three thousand hours on my Rapman.  It became apparent some months ago that  Rapman was not a heavy duty machine.  I started seeing stress cracks all over the machine and was faced with a x-axis extruder mounting plate that just crumbled away from the heat of the extruder and the mechanical stress of being moved around.  I replaced it with an equivalent aluminum plate. 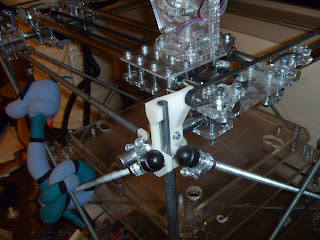 Early on Rapman users began to design replacement parts for the bits of the Rapman laser cut acrylic that fell apart.  You can see a corner block designed in white ABS by Chylld in the picture above.


You notice that I only put ONE of Chylld's excellently designed, fast printing corner blocks onto my Reprap machine.  Once I got it on it has performed beautifully.  Unfortunately, I had to half way disassemble my Rapman to get the damned thing installed.  That wasn't an experience that I thought worth repeating.


Late in 2010 I decided that I wanted to experiment with dual extruders.  Bits from Bytes had come out with one some months before and I decided that I would get one.  When I called, they were so focussed on their new 3000 printer that they wanted me to switch over to that and did a hard sell.  I never react positively to hard sells, so I put off the purchase.  As well, the dual head Rapman had the same dimensions as the old one which meant that it had a reduced print table area as a result.


After the beginning of the new year Bits from Bytes was acquired by 3D Systems.  I attended the telephone meeting announcing the takeover and was so put off by the 3D Systems CEO, Abe Reichental, that I abandoned any plans to purchase any more Bits from Bytes equipment at all.


That left me with quite a dilemma.  I had never been particularly happy with the Mendel design.  Tommelise had used very similar kinematics.  The problem with it that it requires a larger footprint than the print table and is unstable in the x axis direction.  Mendel addresses this last issue with a electronics mounting board that doubles as a reinforcing plate to cure the x-axis problem.  Because of that, I decided to stay with the Darwin kinematics and run the system through another kaizen exercise.


Basically, I want to look into several possible improvements to my Rapman

My experience with trying to install the Chylld corner on my Rapman has caused me to want to rethink the whole issue of parts design for a Reprap printer.  I feel that we have, in a way, gone wrong when we designed the parts for Darwin and Mendel.  Because you can custom tailor individual parts with a 3D printer doesn't, to me, mean that it is good design practice.  Right now, to have a proper set of spares for a Darwin or Mendel you pretty much have to print a full parts set.  A lot of that stems from, in my opinion, from custom tailoring parts.
I don't think too many Reprappers are going to bite the bullet like Adrian Bowyer and Nophead {Chris Palmer} have and print whole sets of parts day after day and week after week.  Most of us want Reprap machines so that we can design and print other things beside new Reprap machines.  To that end, having a limited set of parts types that you can print a few at a time during down time when you are doing design, seems to me to be the way most of us are going to propagate more printers.
With respect to a new y and z axis design I want to revisit the cabling approach that eD did with the Darwin precursor ARNIE back in 2006.
But, enough talk.  Here is what I have so far. 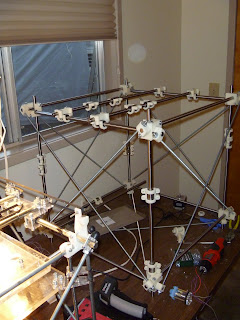 Sampo's frame is built on a 600 mm module to give it that extra space for dual extruder print frame that Rapman's 400 mm does not. So far, the entire frame has been assembled with exactly five different parts. 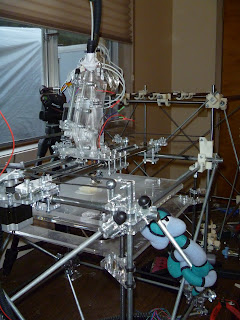 Here you can see the Sampo frame beyond my Rapman 3.0 for scale.  I am working on the cable housings for the z-axis as this blog entry goes to press.
Posted by Forrest Higgs at 7:14 AM 11 comments: