I had to go back and do some cleaning up in the raft generation coding. Mostly that entailed porting the latest infill code from the object infill back to the raft. Integrating the raft with the infill print was trivial. I keep the perimeter and infill xml in separate files for each layer, so doing a print is largely just a matter of shuffling files.

The first exercise I did was to print the raft first and then print the infill of the object on top of it. 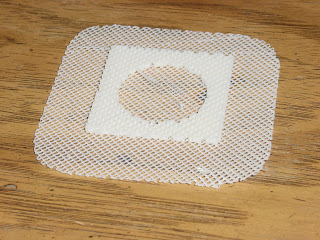 The infill stack was 2.5 mm thick.  I've never been able to understand why Skeinforge prints such a heavy raft so slowly when for the Rapman extruder printing at high speeds and high polymer flows is a snap.  I printed a two layer, 0.25 mm/layer thick raft at 16 mm/sec.  It stuck quite nicely.  I then went on to print the infill on top of it a few minutes later with no problems.
Just for fun I popped the perimeter for the object that I'd printed at lunch over the infill. 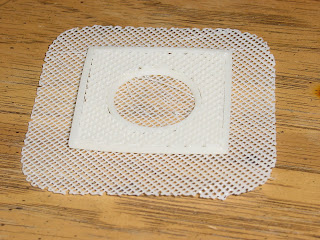 It was a bit of a tight fit, not being welded to the infill during the print, but it reassured me that I hadn't got the overall sizes wrong in the analysis..  I will see if I can integrate the perimeter into the object print in the morning before I do my day job.
Posted by Forrest Higgs at 10:10 PM

I expect the slow thick raft comes from my work as that is how I used to do them.

The first layer had to be thick to allow for an uneven bed as the Foamex material I used to use got pitted after a while. As my extruder at the time was limited to 3mm^3/s that also meant the first layer was slow.

I did closely spaced layers on top so my objects have a flat base, rather than rippled. Also if you have a corner of an object that is between raft filaments then it tends to lift in my experience. Or if you stretch the filament like I do it simply cuts the corner if there is nothing below it.

I did much the same thing when I was running Tommelise 1.0 years ago. A thick raft is an excellent way of smoothing out a dicey print surface. :-)