... it's socially unacceptable. Slice and Dice is my code, however, and when I want to try something new I can just dive into the code without having to ask anybody anything.

I've got to the point where I'm testing parts of the gcode generation on the Rapman. 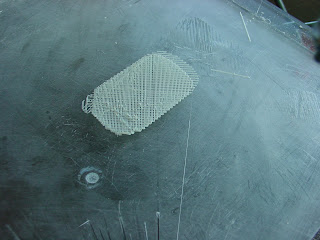 Right now, I'm doing test prints for a fitted raft for a small, rectangular block.  As you can see, I have a problem with the alignment between the two layers of the raft.  The roughness of the second layer is happening because I haven't got around to arranging the print roads end-to-end yet.  Sorting out the alignment comes first.

I've also tried printing out a few layers of the block itself.  I've got a bit of trouble with the perimeter which I hope to get sorted out later today.

Having a printer sitting next to the PC I'm developing the Slice and Dice code on that can test code changes in a matter of a few minutes is a real blessing.
Posted by Forrest Higgs at 8:44 AM