I was able to fully test the perimeter vectorisation code at lunch today.  Here is the test print. 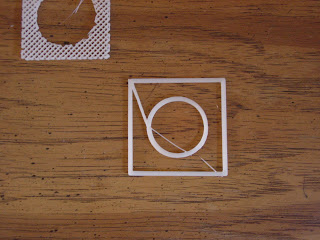 The infill, done earlier, is to the upper right of the perimeter print.  I left the extruder on when the print moved from the outer perimeter to the inner so that the two parts would stick together.  I've found that photographing white ABS print on a sanded acrylic print surface on the Rapman gives you a very low contrast pic which is a pain to read.  Putting white ABS on a wood veneer background photographs very well, on the other hand.

I set the extruder to print a little thick so that it would stick to the print surface without a raft.  The outer perimeter is 2 mm wide.

The vectorisation code produces pretty smooth, fast gcode.  It is not perfect but it will do for now.  The next step is to integrate the code modules which process the perimeter and infill.

Posted by Forrest Higgs at 2:33 PM