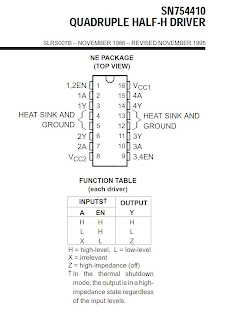 The SN754410 is a very nice little chip.  It is DIP, easy to use and very reliable.  The only real problem with it was that you couldn't run more than 1.1 amps on one of them continuously.  Simon McAuliffe, a Reprap core team member from its modest beginnings in 2004 solved the capacity problem by stacking one on top of another.  While this worked, it created a rather nasty soldering problem for people like me who lack good fine motor control.

In those days we were using stripboard, known in the UK as Veroboard after it's original source.  Stripboard is a wonderful development system for DIP chips.  Unfortunately, it was hard to get in the US, a Velleman Euroboard costing anywhere from $6-15.  As time went on, Reprap went more and more over to designing boards with Eagle and sending them off to lithography shops.  Once there, it was only a matter of time before surface mounted chips began to creep onto the boards.

Surface mount is a whole other chip packaging technology which caters to automated circuit board production.  It is a bit difficult to make surface mounted chip boards, especially for clumsy oafs like me.  As a result, I stayed with DIP technology, suffering considerable derision by other Reprappers as a result.  My point was simple, however.  I felt and still feel that if a  bright 12 year old can't master the technologies and techniques needed to make a Reprap machine, we're not going to see viral diffusion of the Reprap technology.

Last week, having got a grip on how to run my Rapman 3.0, I decided to look at developing the controls for a next generation stepper controller.  I ordered a bunch of the cheap stripboards... 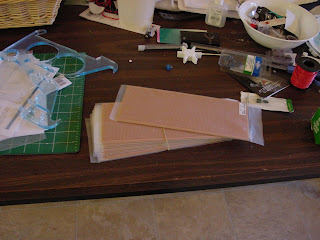 ...to make sure that the web advertisement wasn't a fluke.  The boards are quite high quality, made in Taiwan.


Once I had those in hand, I decided to leverage the work I'd done with I2C coms last year and design a high capacity stepper controller board.  To keep things simple I took a page from Simon's book and decided to simply keep adding SN754110 chips till I had the amperage capacity I needed.  I wanted the design to run a NEMA 17 {I own about a dozen} that I'd bought at the beginning of my involvement in Reprap.  It draws 2.4 amps, so I needed three SN754410.  Here is the design I've developed so far. 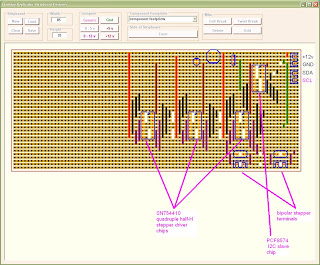 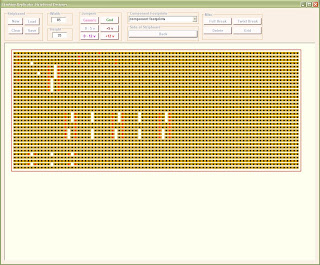 While I've configured this board for 3.3 amps capacity, it will easily seat another 2.2 amps of capacity.  The circuit design is extremely repetitive.

I got the thing built and the circuitry debugged last weekend. 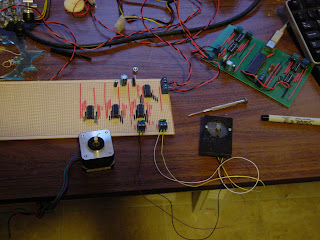 It has been a while since I built up a board, so I blew up a few chips until the drill of checking every circuit trace for continuity and checking again and again for shorts caused by sloppy soldering came back to me.  I found that putting a washrag over the board when I powered up contained the fragments of exploding SN754410 chips.

In testing, I have been able to get a small, half-amp tin can stepper to run at speeds of up to 830 Hz.  I seem to be able to run the NEMA 17 at about 4 KHz at full step.  Mind, that is an estimate from my timing cycle and is probably on the overconfident side.  I still haven't found the bug in the firmware that is causing problems with directional control.

In passing, the three SN754410 controller chips stabilise at about 90 C when running the NEMA 17.  I haven't decided whether I will glue heat sinks on top of the controllers or bring the temperature down by adding another controller chip.
Posted by Forrest Higgs at 9:52 AM

SMT components go against one of the original goals of the project, which was an odd path for them to take.

Doesn't SMT process make replication easier? Reprap can probably be very easily adapted to apply the solder paste, then all you need to do is place the smt components and shove the board into a toaster oven.

Yup, assuming you have a pick and place machine and want to make a bunch of boards at one go.

As a card carrying Oaf club member I second, and carry your sentiments regarding SMT, wonderful stuff, once the ole pick and place machine is running a significant PITA prior...

I intend to stick to "alternative" board designs like this for all the Gen 1 efforts. mostly due to my aging vision.

This is a wonderful discovery (for me) and a fine example of innovation (for you)
newer is not always better - that determination requires a context...
James at CubeSpawn

I like this Idea as it adds diversity to the Electronics the greater number of economic alternatives the better.

When the first SMT board was created by Zack I bought one built it; I found instantly my eyesight had seriously deteriated since the 80s when I last used SMT. So had to buy a magnifing head set. This causes great mirth if any of my kids pop arround when Im wearing them.

I have never built Gen 1 Electronics as when I tried to find it on the RepRap site it had been depricated and my original book mark then failed.
So I bought 2 sets of Gen2 boards in now have 2 sets of Gen 3 boards and my own board design yet to be made. So this is a nice diversificaton I think for those who want to use devices that may be lurking in a draw or crumpling black conductive foam. We are all suffereing the effects of the global recession this opens up the build base nicely. The phisical look or age of the electronics makes no diffrence to the final function.
For some builders this is a better solution for others its not its a case of horses for courses.
The only advantages of the Gen3 Electronics is size and not haveing to provide cooling measures for the driver chips maybe ease of connection for the novice builder.