Printing the big bits of Mendel

I've been hearing that people are struggling to print the largest parts of Mendel in ABS, so I've decided to see if it can be managed in HDPE using variations on my "no-sweat" method.

I tried Sunday with a full apron around the "x-carriage-lower_1off " part.  The print failed for several reasons, the most important of which was that the apron in shrinking mechanically connected with the print in the y direction  As well, having a full apron around such a big object added to the contracting force put on the raft by the printed object.  That force caused the raft to break free from the polypropylene print surface.

This morning I broke the apron up into four parts, not unlike what I was doing when I was doing guying and flanges a few weeks ago.  You can see what I've done with a screen grab of Skeinfold's Viewer. 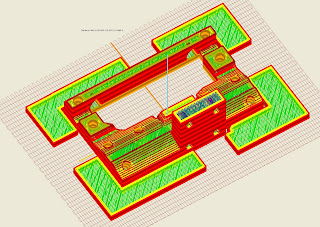 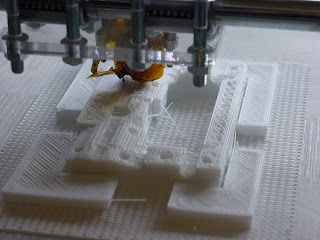 Breaking up the apron so that I didn't have long stretches of apron adding to the stress that the print was putting on the raft/polypropylene interface seems to be helping. 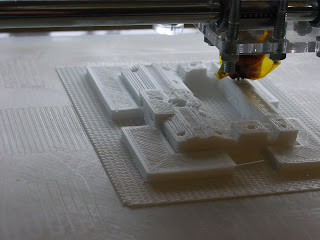 I've got way past where I was when the print failed last night and so far I haven't heard a single one of those little crackly noises that signal that the raft is beginning to pull away from the print surface. 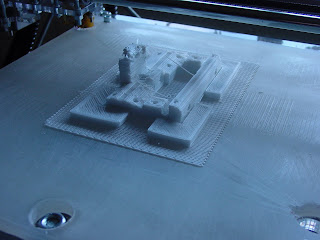 The major problem, as you can clearly see, is that the final little flange on the left was melting down. 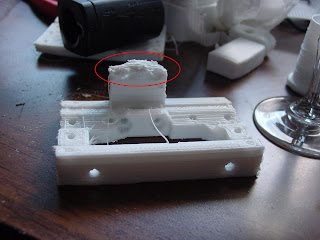 I didn't set up Skeinforge for a cooling cycle.  I am still getting used to how to do that, so I am going to just print the flange and test settings till I get something satisfactory.

The major problem I had was that when I moved the apron segments away from one end of the print I got them a little too far away. 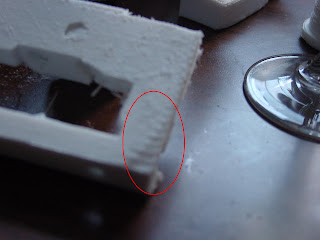 The lift on this corner was 1-2 mm on the near side {circled}and ~1 mm on the other.  Looking at the other end. 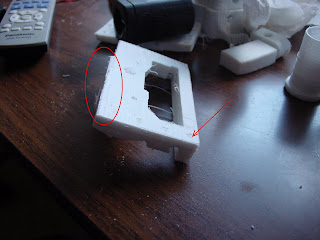 You can see that the left side {circled} lifted about 0.5 mm while the right side was perfectly flat {arrow}.  I got a little over-ambitious about moving the apron segments away from the print.  I can fix that with zero trouble.

This is going to work.  It's down to a matter of just tweaking the apron position a bit and sorting out some Skeinforge settings.

I expect that the combined STL for this can be used with good effect in ABS, since ABS is reputed to warp much less than HDPE.

Posted by Forrest Higgs at 7:55 AM