When I bought my Rapman 3 I ordered two extruders and an extra extruder barrel drilled to 0.3 mm. When I assembled the extruder, I thought I had picked up one of the two 0.5 mm extruders. Instead, I had got the 0.3 mm one.

Oddly, I hadn't noticed the difference. The Rapman 3 extruder's filament pump was more than powerful enough to force 0.5 mm flow rates through my 0.3 mm extruder orifice without complaint. Thus, I was able to print what appeared to be 0.5 mm objects ... until we got to overhangs. When the extruder got to the overhangs it literally squirted the hot plastic into the voids festooning the print with what looked like plastic tassels. 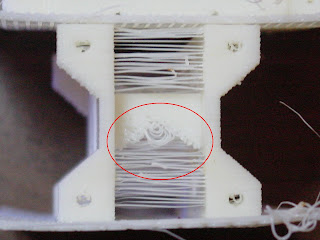 I'd have probably never figured it out what was wrong save that my extruder orifice jammed.  When I cleared it with a 0.25 mm strand off of a multistrand wire, I noticed for the first time that the ABS being extruded looked a bit thin.  In fact, when I measured it, what was coming out was 0.38 mm in diameter.  There was no way a hot filament that thin was coming out of a 0.5 mm orifice.  That was when I realised that I had put in the 0.3 mm extruder barrel in error.

Knowing that, I reduced the flow rates and layer height to 150 and 0.25 mm and the overhang problem magically went away. 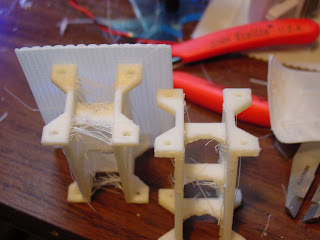 The new print is, of course on the right.
Posted by Forrest Higgs at 10:50 PM

Reducing the layer height makes perfect sense ... but why are you changing the flow rate? Clearly, your extruder can handle the rate it is at.
Would it make sense to print some test objects at various flow rates, to see how far you can push it?

Been looking at your wonderful linkage and thinking a little.

It should be quite possible to save on a little plastic and make it with 3 linkages in a triangle format as opposed to a square format with 4 linkages.

I don't know if it would be as good though.

James, check the Tony's blog about calibrating the machine: http://rapmanv3.blogspot.com/2009/09/more-skienforge.html ... the width of the wall should be layer thickness * Perimeter width over thickness (ratio) so you have to get the extrusion speed just right or you have too much or too little plastic on the object. Getting the head speed/extrusion speed/layer thickness ratio correct makes your object "precise & beautiful" or "messy"