In which your narrator confects his own idiosyncratic method of replicating laser cut parts.

The recent acquisition of the UK manufacturer of the reliable Rapman printer, BitsfromBytes {BfB}, by the American firm 3D Systems has exacerbated a long standing problem that the Rapman's users' community has had, vis, getting drawings of the laser cut acrylic parts that make up the system. While BfB uploaded drawing files of one of their early Rapman designs into the Reprap website, they have neglected to do so with version 3.0 and later models to the best of my knowledge.

That wouldn't be such a problem save for the fact that the acrylic parts in higher stress parts of the Rapman tend to develop shear cracks and spalls after hundreds of hours of operation. Rapman owners are then left to either request replacement parts from BfB or print their own spares. Interestingly, there is a healthy spares design effort underway for the Rapman, part of which is hosted on the BfB website itself. 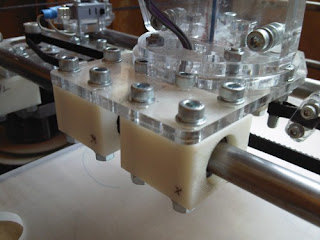 Here the printed white ABS grips for the x-axis linear bearings replace the lower plate for the extruder carriage in a much stronger configuration that the original.  Indeed, at this moment, there is a very exciting redesign of its printable parts underway by an Australian newcomer that greatly reduces the print time required for what were finicky corner blocks. 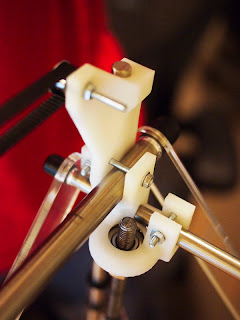 All this aside, there are many pieces in a laser-cut printer that simply need to be printed as-is in ABS rather than redesigned.  Heretofore, I found myself carefully tracing the parts out on paper and using calipers to get the dimensions.  While that approach works well with many parts some, like the extruder z-depth stop plate are much more problematical. 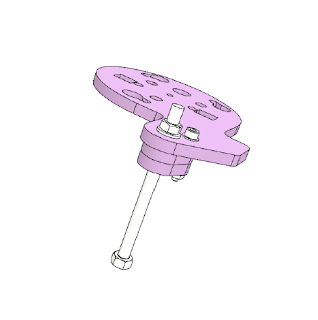 This particular plate is the antithesis of rectilinear and locating the holes and pockets is tedious to put it mildly.  I'd thought that it ought to be possible to use an ordinary 2D scanner to capture this sort of information.  Today, I gave it a try and discovered that it was not as straightforward an operation as I'd imagined.


I had an extra copy of this part that I'd bought still in the protective blue film, so I threw it in my Epson Perfection V500 Photo scanner, a very cheap and extremely high resolution machine.  Even with the blue film the image captured didn't have a lot of colour information that would let you think that you could separate the part from its background. 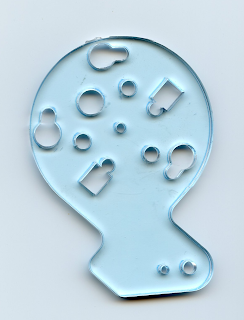 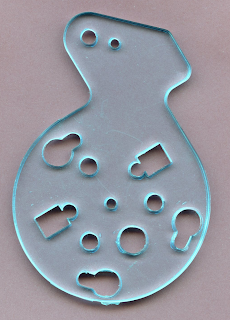 Two things were killing me; the transparency of the part and it's depth, which you can see very clearly in this scan.  When I tried to just capture the edges by going high contrast, the depth of the object spoiled everything. 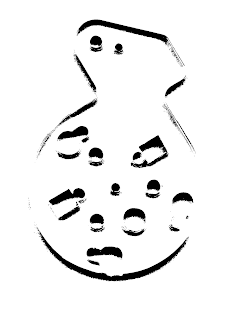 It occurred to me that I could paint the part on one side with tempra paint, which can be wiped off of slick surfaces.  Rather than drive into town and given that the part was already protected with a blue film I simply spray painted it with red enamel.  I then put it back in the scanner with a piece of dead black HDPE sheet behind it and instantly got the colour separation I needed.


Popping the scan into Slice and Dice and filling the black with green, I had an image I could work with.  As you can see, it was a little nasty, largely due to the messy laser cutting on some features and a bit of flare here and there. 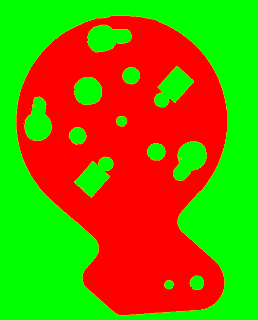 A few moments in Paint cleared that up. 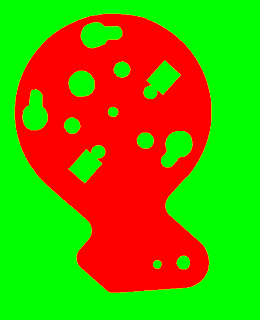 Now that I had crisp colour separation, defining the part boundary in Slice and Dice was trivial. 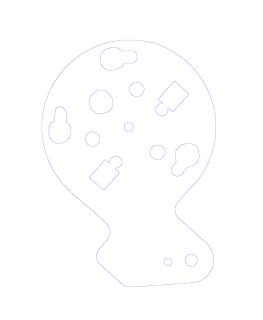 While I was in paint I took the pixel counts across the diameter of the outer circular feature boundary and measured the same feature on the part with calipers.  I then adjusted the size of the image in Paint.


With a bit of pushing and shoving in Slice and Dice, I processed the part and created a print file.  Here you can see the print roads for the part. 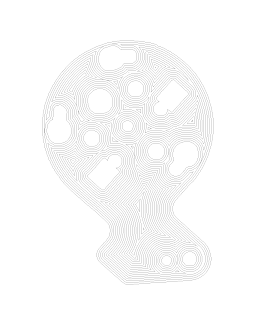 With a print file, I did a trial print to check the dimensions.  The acrylic part lay precisely over the printed part. 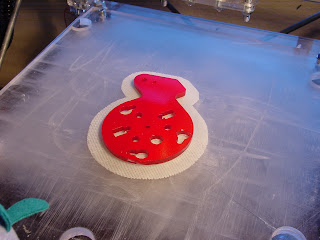 I photographed it again with the original part slightly ajar so that you can see the holes in the print. 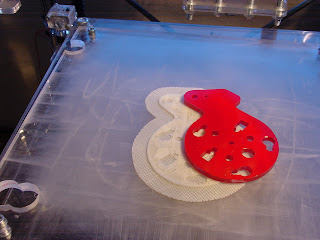 If you look closely at the several layers of part print that I ran before aborting it you can see that I need to increase the print flow a touch.  More importantly, with a part of this size and complexity, however, I am going to have to write a routine that makes a better job of reducing transition distance between print roads.  Transitioning was taking far too much of the machine time.  That's on my "to do" list now.


What I've demonstrated here is not a smooth operation on Slice and Dice just yet.  I was mostly trying to prove the concept.  That was a huge success.  What this means is that owners of laser cut reprap machines can readily exchange parts information with nothing more complicated than an ordinary 2D scanner and a set of calipers.  This should give us considerably more flexibility than we have at the moment.


I am certain as I finish this blog entry that someone is going to show me a simpler, faster way to do this in a few hours.  That's certainly happened before.  If not, though, we have this approach.  :-D

Also thanks for describing my new corners as "exciting" :) I have just finished testing the last corner and the complete set is now up on http://www.thingiverse.com/thing:4398

carefully peel off the blue plastic protection and scan that instead.
No depth issues :-)

nice work! I've also got a BFB macine with a few cracked parts, so it's good to know there's a replacement route.

... where can i find the simplest version of Slice-n-Dice?

I need a tool for creating filling paths out of bitmaps for my laser-worx and won't go through the toolchain with skeinforge and my CAM for cleaning the feeding paths away ...

Rather than using calipers and calibrating your scan that way, put a coin in (I use a UK 2p) near the object. You can then use its known size for calibration.

I used to use this technique for digitising various wooden formers with a digital camera - being round you can easily pick up distortion too.

chylld: I hope you don't mind if I steal your new corners for a proper open source redesign I've begun on Darwin/Rapman now that BfB has been taken over by 3DS.

Viktor: No such version of Slice and Dice exists. It's basically a very messily written toolbox of routines that allow me to do what I want with my Rapman printer. As I said in the blog entry, I had to do some tinkering with the methods and code to get Slice and Dice to do what I've reported. If BfB continues to avoid posting their parts dxf's as I understand they should be, I'll be regularising the method. Hopefully, that won't be necessary.

Hmm, I already digitalised this specific part in March or so.
It took at least 5 iteration to get the measurement perfect. Some millimeters here and there...

I was also working from a photo initially, but after the 5. iteration you cant really say so...

... then maybe i'll try with 'extracting' the Slice-n-Dice from Skeinforge, because here i can better exchange the files (SVG, G-Code) than with the RR-host ...

the PDF manuals that BFB did publish for 3.0 and 3.1 contain drawings of the lasercut part sheets (and one even 3D models). not quite sure how to extract the 3D ones but i already used the 2D ones for replicating the 3.1 build platform.

after opening them in inkscape and scaling to fit, i manually retraced over them to get a clean outline for a laser cutter.

LMAO! I just knew that was going to happen! :-D

If we are talking about replacing rapman parts, do we have a git repositories collecting all available part ready to print?

The cad file for this part has been posted multiple times on the forum. I got it from BfB after I tried the exact same method as you did and thought it wasn't worth the hassle. :)

Unfold: This part I just used an an exercise. The question is whether BfB has posted the files for ALL the parts in the Rapmam.

I am not aware that they've done that. Have they?

Lazlo: Adrian has told me that we BfB uploaded the parts descriptions of an early version of Rapman into the Reprap repositories quite some time ago but, to the best of his knowledge, have not done anything further since then.

... please send me your code, i'll check it for me and/or will see if it's worth extracting and adopting the scripts out from Skeinforge ...

Viktor: I'll zip up a current version and upload it to my website in a few days. I'll post the link on this blog. That way, anybody can have it. :-)

Im not looking for the partsmwhat bfb published, but rather true 3D parts. Im aware Bogdan did some (all?) corners, also your y corners seems true 3D part too.
I dont see the point to reprint the lasercutted parts with a 3D printer.

It's possible to extract the 3D models from the build PDFs using 3D Ripper DX. I just tried it and it works perfectly. It would be a bit of a hassle, but you could isolate all the acrylic parts using it.

I have no idea about the intellectual property laws regarding something like that, though. If someone wanted to get a definitive answer (maybe ask BfB themselves), I wouldn't mind posting the files somewhere. But extracting the models isn't too hard to do yourself...

Never found the time to try that but had the same idea, great that you did and that it worked!