UPDATE: I let my anger run away with me in this blog post. I've just spent time with Ulf Lindhe at Netfabb. Ulf has sorted out the problem I was having with the boolean operations and got me upgraded to version 4.6 at no charge.

It's taken a few days, but I can now print at about the same quality with a 0.5 mm extruder as I was able to print with my now ruined 0.3 mm extruder. I've gone back to work on the active telepresence project and the present task is to create linear servos to as the muscles to operate the hand and fingers.  I'm building my own from gearmotors rather than buying after some bad experiences trying to adapt servos designed to operate the flaps and rudders on model airplanes and sailboats to operate hands.  Andreas Maryanto was good at this, but I am definitely not.

Doing this, I am leveraging the herringbone rack and pinion scripts that I wrote.  While Nophead's advice to simply not fiddle with my 0.3 mm hot end settings got me 95% of the way to where I wanted to be, that last 5% took a little tweaking.  I'm quite happy with the final results. 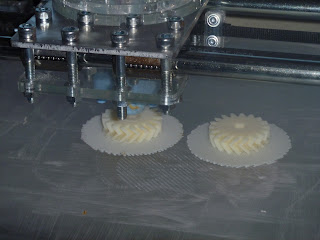 The pinions peeled off of the rafts with a minimum of trouble and only took a touch on the belt sander before they were usable. 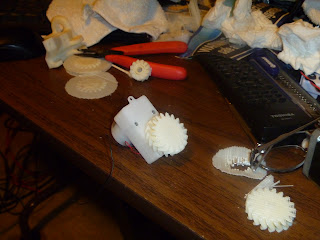 That was relatively easy.  When I started working on the rack, however, I quickly ran up against the limits of Art of Illusion.  While it is easy to assemble a set of solids to represent what I want to print in AoI...

Doing the Boolean opeations to make them into one solid is quite beyond AoI's boolean ops capabilities.  Bogdan told me repeatedly that I could do this sort of thing in Netfabb Professional, so I read up on the method and set about to use my now copy and discovered that the Netfabb people had somehow disabled this feature in my copy.  I had a email from them about version 4.6 {I have 4.4} but no clear idea if I was going to get a free upgrade or have to pay them even more to do something that I am already supposed to be able to do.


The more I think about that the more pissed off I get.  If I don't hear from them in the morning, I am going to build boolean ops into Slice and Dice and give it away for free.  The way I feel just now I might just do that anyway.    I am getting sick and tired of getting ripped off.

Posted by Forrest Higgs at 9:25 PM

I should be able to boolean it for you, send me a PM :)

im currious what software do you use with your machine beside skenforge?

I just got off the phone with Ulf Lindhe at Netfabb and he got my problems sorted out with Netfabb Professional in a very nice manner.

Chylld: Thanks so much for the kind offer. I'm back up and running now with no problems thanks to Ulf.

PimpKittah: I use my own software app, Slice and Dice, to process STL files for printing.

If you tried the netfabb proff (that you own for a while) earlier you will not notice you miss the boolean stuff on the day you actually need them :D but some months before :) and could get the problem fixed way faster...

Too bad for the AOI and boolean limitations, it makes work in AOI incredibly hard -> almost impossible. Blender is much better in that regard but I don't find it easy to work with, I'm used to SI and XSI but they cost too much and other foss apps out there are either windows only or unusable ... attm openscad is (unfortunately) the easiest modeling tool out there and that's ashame..