Getting to the bottom of the Rapman hot end failure

In which your narrator gets to the bottom of why it was that his 0.3 mm Rapman hot end failed and perhaps even why it started causing resets prior to the failure.


Once I had my Rapman repaired and usefully printing again, I turned my attention to doing forensics on the failed hot end. Once I took a hard look at the hot end and the pictures that I took immediately after the failure hints of the means and mode of the failure began to recommend themselves.


Taking a look at one of the forensic pics that I took on the 14th two items jump out at you. I've circled them in red. 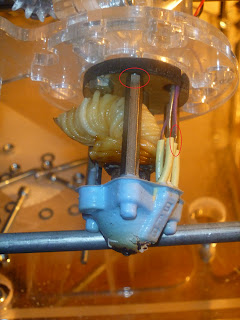 If you look closely at the top red ellipse you will notice that one of the three bolts which secures the spacer on the hot end ensemble was either not tightened adequately at the factory or, more likely, worked its way loose via hundreds of heating and cooling cycles while in operation.  This threw the alignment of the hot end out opening a route for hot ABS to escape between the PEEK sleeve and the aluminum extruder barrel sleeve that fits around it.  You can clearly see the billowing flow of ABS in the picture.  ABS was only leaking on the side of the PEEK barrel where the spacer bolt was loose.  That part is straightforward.


The vertical ellipse on the right hand side of the hot end is much more ominous.  If you look closely, you can see that one of the thermistor leads has exposed above the sleeve leading down to the extruder tip where the extruder is housed.  A bit over 4 mm of exposed thermistor lead is open to the air.  You can see that happening a bit more clearly with this picture. 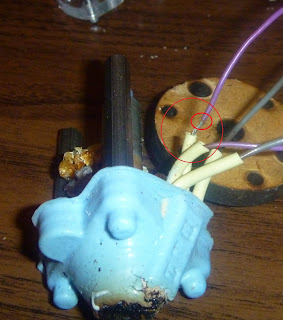 The larger red circle encloses the exposed lead.  The smaller one shows the recession of the purple plastic insulation on the lead that occurred once the ABS began to boil out of the gap between the PEEK and the aluminum and contacted the lead.


At first I thought that the hot ABS had actually caused the gap in the insulation.  Closer inspection, however, revealed that the lead had most likely been stripped too liberally and originally was only just barely covered by the yellow silicone sleeve.  The heat of the billowing ABS almost certainly caused the shrinking of the insulation from just being covered by the silicone sleeve to its present situation.  It's easy to see the shrinkage in the second circle.


I then removed the PEEK cylinder from the aluminum extruder head.  Originally, I had thought that the PEEK sleeve in contact with the aluminum might have shrunk.  It measured 10.09 mm outside of the aluminum sleeve and 9.9 mm inside.  That could have been either because of heat shrinkage of the PEEK over time or some sanding of the PEEK tube at the factor to get a clean fit.  Unless the parts had been measured before the hot end was put into service, it would be impossible to tell for certain.


I then removed the silicone tube from the inside of the PEEK sleeve as you can see here. 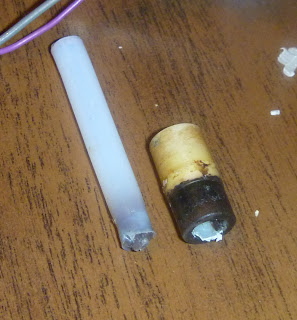 This is the most revealing forensic evidence in the whole exercise.  At first, it appears that the silicone tube has shrunk on the hot end.  While that is true to an extent, the reason for the shrinkage is actually because the inside diameter of the PEEK sleeve has shrunk because the PEEK has expanded within the confines of the aluminum sleeve.


It was fortunate that I bought several unassembled hot end kits before BfB began making premade ones because I had some disassembled PEEK and silicone tubes.  The unused PEEK sleeves had an outside diameter of 10.0-10.1 mm and a consistent inside diameter of  6.36-6.40 mm.


I don't think that that was how the hot end design was intended to work.


Getting back to that exposed thermistor lead, it is well known that blowing hot air past plastic surfaces will create a static charge.  Not only was that exposed lead within millimeters of billowing hot ABS it was also touching the bottom acrylic plate of the x-axis carriage {part 10034}.  Periodic static discharges off of this heated acrylic surface were most likely at least deranging the temperature measurements off of the thermistor and also causing the MCU board to reset.  During last winter, I walked in socks across the floor and picked up sufficient charge to where when I touched the MCU board the system reset.


The failure of the hot end had two aspects.

It seems quite obvious that the combination of a PEEK sleeve enclosing a silicone sleeve for the plastic filament need to be rethought.
The placing of an MDF plate and an acrylic plate at the top of the hot end spacers through which the securing bolt has to pass also needs some careful.  Replacing the MDF with a PEEK plate with the bolts secured by lock washers to the PEEK plate and recessed through the acrylic with the acrylic and PEEK secured by a separate trio of short bolts might be more successful.  An aluminum plate as a replacement for the MDF might also be considered.
Posted by Forrest Higgs at 8:31 PM

thank-you for your very thorough analysis of the failure of the hot end. We will be evaluating this carefully here at BFB and will contact you directly to discuss further.

> If you look closely at the top red ellipse you
> will notice that one of the three bolts which secures
> the spacer on the hot end ensemble was either not tightened adequately
> at the factory or, more likely, worked its way loose via hundreds
> of heating and cooling cycles while in operation.
> This threw the alignment of the hot end out opening a route for

Or more likely the PTFE tube's end was not perfect in the first place,
ie. hand cutting the end of silicon tube will never have a perfect
ortogonal edge to the tube.

And I believe the screws untightened because of the pressure caused
by the leak. I think it leaked slowly during multiple prints, so had
time to unscrew the bolts. Once the ABS escaped, things just became fast,
hence the big mushroom. (you cant notice small leakage, until you dont
disassemble the hot-end).

> hot ABS to escape between the PEEK sleeve and the aluminum
> extruder barrel sleeve that fits around it.

I believe the PEEK should seal too. So if the plastic managed to
escape there, then the PEEK tube was too loose in the aluminium barrel.


> You can clearly see the billowing flow of ABS in the picture.

Well it can caused by extruder start-stop moves too...
It does not extrudes continously all the time...

> ABS was only leaking on the side of the PEEK barrel where
> the spacer bolt was loose. That part is straightforward.

Well it does not imply the order of causal link.

Forrest,
It is always the case the plastic melts in the insulator of an extruder. The metal barrel is at roughly twice the melt temperature. The insulator has a thermal gradient down it and the point where it is above the melting point will be some way further up the insulator. This is why the insulator needs to be slippery or have a very steep temperature gradient.

> The swelling of the PEEK sleeve
> over time reduced it's inside
> diameter almost entirely closing
> the silicone tube and causing the
> ABS to have to melt in the
> silicone tube rather than in the
> aluminum hot end. This was
> certainly not the intent of the
> hot end designers.

I feel like I ruin your experience, but Im not on the same conclusion you've got.

I think the real reason why the PEEK tube shrunk, is that the plastic leaked, and pressed the tube around.
That is why, it only shrunk inside the aluminium barrel.


Also what I observed in your pictures, is the discoloration of the spacers.
That means the spacers was at too high temperature, which is an exact problem, what I ran into.
(although I never brothered to write the blogpost about my dead-end extruder design (I redesigned it two weeks, and Im waiting the new prototype to finish at CNC shop)).

Anyway, one of my problem was, that the spacers had a too great thermal contact with the heater block, and the spacers became too hot, and caused all sorts of problem.

I think, the blue housing on the barrel do lot more harm then help.

Maybe I should still write my summary article, just people are more interested in shallow articles, like my "Blender broke" article. So dont think there is a demand for in-depth analysis...;-\

Forrest,
> It is always the case the plastic melts
> in the insulator of an extruder.
> The metal barrel is at roughly twice
> the melt temperature. The insulator has a
> thermal gradient down it and the point
> where it is above the melting point will
> be some way further up the insulator.
> This is why the insulator needs to be
> slippery or have a very steep temperature gradient.

i thought a lot lately nophead why your plumbstruder is working
(although you have not tried with hdpe or pp, which are harder to
extrude, but you are using a 0.35mm(?) orifice)

And I always wondered what is the temperature at the very top (inside
the ptfe tube) of the threaded brass.

And the other thing was, maybe the plastic melting zone ends inside
the brass tube, and in the ptfe tube it is rock-solid.

(ok there is a bit unrelated thought too, namely what is the best
material for the nozzle: aluminium, copper, brass or stainless steel
I cant get manufacturer for the stainless steel, but the other three
are valid options)

Nophead: "It is always the case the plastic melts in the insulator of an extruder"

I think, perhaps, you've forgotten the way I designed the extruder for Tommelise 1.0. :-)

The temperature of the barrel where it met by the flange ran about 85-105 C while I was printing in HDPE.

The way most people design extruder hot ends, you are absolutely right. A hot end can, however, be designed that won't have the melt going on in the PTFE, however. I've done it. :-D

Forrest: Can you disassemble the nozzle? The blue housing, and the triangle, what Im particular curious about...

Mine had a stainless steel triangle, while yours looks like something more thick, maybe aluminium?

I think you dont want to use it for anything this hot-end, so maybe you can absolutely destroy it. (at least the blue housing, and what is under it).

I hope Im not asking too much here...

Lazlo: Not a problem at all. I peeled back the coating on the hot end and it is definitely not aluminum. Looking at it, it appears to be some variety of stainless steel not unlike what BfB has previously supplied with their unassembled hot end parts kits.

As you know, most stainless steels are very poor conductors of heat.