The ability to reverse the extruder on my Rapman printer during transitions between print roads has reduced stringing to an enormous extent. What stringing I do get tends to be very thin and feathery.

I've noticed an interesting stringing behaviour since the release of firmware version 4.0.2, though. You can see it here. 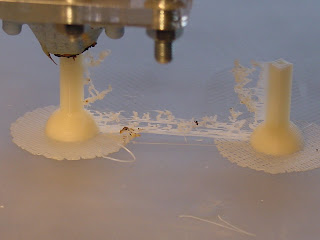 What you will get is a thin string between two objects being printed being propagated and then the string acting as a brush on th extruder orifice at intervals between roads.  These brushed accretions build up into quite beautiful forms resembling frost.

When you get just a tiny bit of string hanging off of your print you will see the brushed accretion building up at 45 degree angles into something resembling fractal patterns.

This phenomena isn't a big issue for me.  The accretions are thin and fragile and brush off easily without sandpaper.

Posted by Forrest Higgs at 8:08 AM

I've seen these build at as little as 25-30 degrees from horizontal from a shield to the origin, then turn to follow the y axis while also extending straight up along the Z. Haven't seen many since I started getting reliable extrusion, though.

Yes it looks like you are you printing a replacement parts for a coral reef.

... this seems to be an effect of viscosity and surface tension of the material ... when tempering really thin wires of gold (<200nm) on a surface, they tend to separate in a chain of small droplets.

This could be the same for the semifluid strings while beeing drawn in midair, cooling down and shrinking at the 'far' end, but hot and viscous near the nozzle ...

I've seen the same kinds of formations on my Mendel: