In which your narrator seems to have come up with a way to prevent raft peel for ABS on an acrylic print table.

Indeed, it was a little warped so I used a belt sander on it till if was as flat as the milled straightedge.  That seemed to work for about an hour but I was soon back to where I began.  I then decided that the table was now adjusted properly and went to a great deal of trouble getting it so on my Rapman.  Same result.

In desperation I began to print on the left hand side of the print table and the problem went away.  It was still troubling, though.

On Tuesday, I finally caught on.  In the last weeks the weather had cooled to where the outside temperature was in the teens more often than not and dropped into the single digits {Celsius} in the early mornings when I began to work.  I looked at the printer table and noticed that the window I used to ventilate the work area was on the right hand side of the printer.  The next time that I had a raft detach I measured the acrylic work surface temperature with my IR thermometer and discovered that whereas it was about 25-26 C on the left hand side of the table the draft from the window dropped that to 22-23 C on the right hand side.  I was rather shocked that I got that wide a variation in surface temperature over a few centimeters distance, but I certainly did.

I closed the window and the peeling instantly stopped.

That remedy wasn't workable because of the ABS fumes, so I rigged a portable heat lamp onto my camera tripod to shine on the print table. 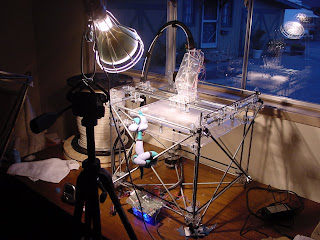 The radiant energy keeps the acrylic print table at 34-40 C with the window open.

I haven't had a raft detach since then.  I've done a few dozen prints, mind.

Posted by Forrest Higgs at 7:50 PM

... a clear point for a tempered housing :-D

Hold on a sec, In your Previous Post you said you didn't have trouble with warping, and you didn't know what all the fuss was about. It seems now that you think that you need a heated bed, heated chamber, or heat lamp!

Viktor: I don't think so. A tempered enclosure places all sorts of design restrictions on a printer. A small heat lamp which can be turned off as soon as a print is several millimeters high is much simpler.

Giles: The weather had been considerably warmer for some months and I actually wasn't having any trouble with warping.

As well, when a raft detaches, you don't get warping because the extruder starts pushing the print object around on the print table, which is to say, it's immediately ruined, not warped.

Brrr I think I need a heat lamp feel like I'm warping out in the Home office.. !

I'd previously used this one to keep my legs warm under the table I keep my workstation on during the worst of the bad weather in Winter. :-)

There's an interesting essay by Paul Graham about the effects of cold work space on innovation.

I take all of his writing with a grain of salt, but the case made in that essay has me more convinced that your work to make RepRap printers appropriate for marginal spaces is really important.