Bogdan began to question me about just how much stress these plastic beam modules could deal with.  When he caught on that I was post-tensioning the beams he had no trouble accepting that they'd likely do the job.  Just for fun, though, I went ahead and printed up four modules and assembled them into a 400 mm beam, post tensioned them and ran them through their paces.

I was going to print special end plates, but it's getting late and my day job will be rather intense tomorrow, so I used one of the end plates from the last post-tensioning exercise with the herringbone rack column. For the other end plate I used a strongly designed washer that I printed for another purpose some time ago.

First, I did the same loading as last time, but this time the beam is 30 mm deep instead of 20 but much less heavily built. 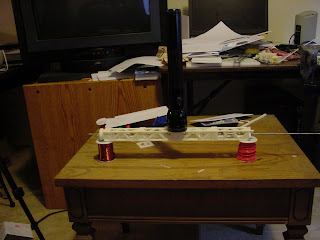 No deflection to speak of.  No problem.  That Maglite weighs two pounds and is point loaded at the centre of the beam. 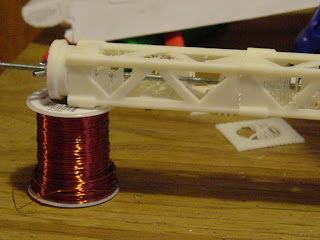 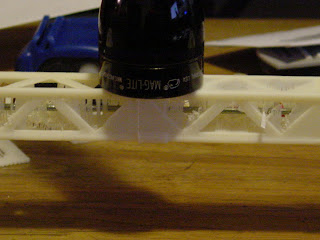 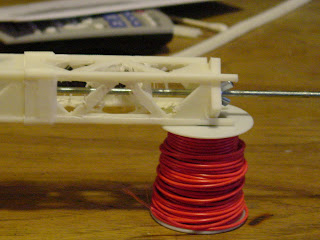 That was nice, but then I decided to get serious about loading, so I broke out one of my ten pound bar bell weights and partially distributed loaded the beam. 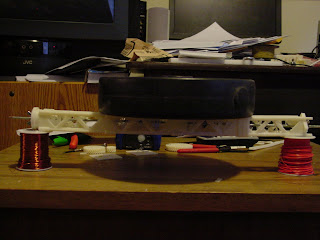 A couple of millimetres deflection, but again not much.  I then threw another ten pound bar bell weight on for good measure. 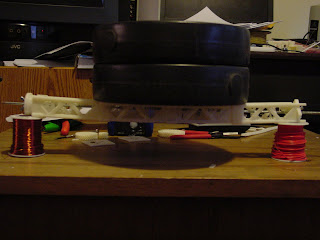 Now you start to see some serious deflection.  Interestingly, the deflection is not because the beam is failing but rather because the lightly designed end plate on the right is beginning to fail.  I replaced that plate with a heavily designed herringbone gear and repeated the exercise. 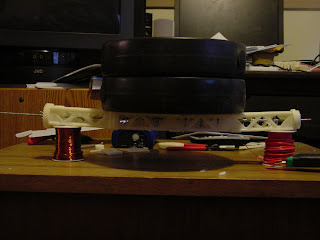 The deflection is better, but I began to worry that the shear stress at the ends of the beam, which I had planned to handle with purpose designed end plates is ill-applied to the light frame beam itself.

For a final exercise, I point loaded one of the 10 lb weights at the centre of the beam by blocking it with a couple of pieces of scrap ABS. 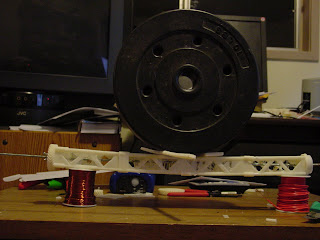 Guys, post-tensioning is a wonderful technology and very well suited to the scale that we are working at.  Several people have suggested using ABS filament for the tension member.  I think the thing to remember is that conventional wisdom in designing post-tensioned beams is that the tension cable or rod needs to be a LOT stronger in tension that the material it is paired with.  In real life, you see post tensioning done with steel rod or cable and concrete.  Concrete has effectively NO tensile strength.  I personally don't think using ABS filament is going to give satisfactory results as a tension element in such beams.  I use thin studding, lock washers and wing nuts because that is easy to work with and beams can easily be put in compression by hand.

Anyhow, I think that if we want to we can get a lot of the structural steel out of our next generation Reprap machines and greatly improve the printed fraction using this approach.

This obviously has great potential to further the self replication. As I see it there are two major flavours of drive and motivation in the reprap movement. personal-fab and self-replication. They both bare many parallels and coexist great in the movement but closer to goal i personally belive design choices will diverify and there will be a split. What is your major drive and if you had to guess, what will be the hardest part to replicate?

What about integrating end-caps ir cross-supports between diagonal corners into each segment?

looks good, but wouldn't a triangle cross-section resist flexing more and be less material to print?

UHDPE is being used for stays in on racing sailboats. You might be able to use that.

Marcus: That's possible, but it adds a lot of extra material to the module. For gritty reality, however, this module design was really pressing the envelope for Art of Illusion. I was barely able to get this assembly to work. Making it even more complex just wasn't practical.

LogbLogb: I responded to your comment where you made it originally on the Reprap blog.

mfsamuel: Triangular might well be more efficient. Singe I was thinking about rectilinear problems when I designed this one, I stayed with the square cross-section because it was easier to integrate into the rest of my design.

Todd: I have 40 kg of polypropylene and 8 kg of HDPE which might go a ways towards answering that question.

And you'll get even better behavior if you put the reinforcement through the columns -- what you have here is essentially a 15mm depth because the part below the metal doesn't really have any strength in tension. (So your deflection is largely the result of compression in the upper section.) Speaking of which, has anyone designed a fabbable barb fitting for making joints that can easily be assembled but are then strong in tension?

A look at a table of materials properties shows that pretty much anything has more tensile strength and modulus than ABS/PLA/etc. I would tend to go with kevlar cord, which is readily available and terrifyingly strong. The issue will be how to make end plates (washers?) that will distribute the load.

paul: There are a variety of braided cables and monofilaments that could be used for the tensile member in post-tensioned beams. How you attach them to the end plates and how you put them in tension are the big issues. I haven't got time to tackle those problems right now, so I am content with using small diameter studding, lockwashers and wingnuts. Those work easily and are very easy to acquire at just about any hardware store.

exciting to see this, forest! well done. i'm kind of excited to see the first usable structure printed out of these, say a mendel (or even a darwin) with these replacing a lot of the larger threaded rod segments.

for down the road, i really like the suggestion of using a cord with some method of post tensioning. it seems pretty innovative to replace much of the threaded rod vitamins with some RP parts and a spool of some thin cable or filament, tied to some tensioning end fasteners.

This is a really good result - I'm impressed at how much load a few grams of polymer can take!

On using polymer cables for tensioning: keep an eye out for plastics that creep/relax over time. I believe that Kevlar has very little stretch, and might be suitable for the job. However it will be difficult to secure ropes / braids to an end cap without letting any slack through your knot. Some form of ratchet fastener or tightening mechanism would need to be fabbed in.

Paul: a friend of mine is doing a Masters on rapid prototyping, and apparently the reprap fused-deposition method isn't very strong in tension - the layers tend to delaminate (pull apart). Possibly Forrest could fabricate a member with a hole in each column and use multiple tensioning members to overcome this?

As a professional guitarist, I can't help but think of musical instrument string technology.

My technical knowledge is too limited, but the strings and tensioning mechanisms from the musical world might inspire some solution here.

Rather off topic, but a very interesting read on natural materials with high tensile strength:

Jonathan's comment on creep is an important one. Forrest: could you do us all a favor and see what happens if you leave your test object loaded for a few days? We might want to be looking for the highest possible modulus (least stretch under tension) so that the structure doesn't creep in compression from the tensioning members.

(And I'm betting something like an eyebolt through a nut on the far side of a possibly fender washer should do it for all sensible loads...)

Plastics creep is certainly a very real problem. What I think I haven't communicated very well is that the light frame module that I designed is an extremely tentative experiment.

I learned a lot doing the exercise. A few things...

The pin and socket connection between modules was not a great ideal. It looks good but it's fragile.

AoI can only be used for this kind of design work with extreme difficulty.

Skeinforge as it stands now isn't very useful for this kind of work, either.

Keep in mind that the module I designed was intended as a load bearing column, not a beam as such. Had I designed a beam I would have put more plastic on the compression side and mounted the post tensioning studding down towards the tension side instead of the middle.

This is only the beginning of light frame design work. It isn't reasonable to expect that a first cut exercise will be anywhere near optimal. We're going to get LOTS better at this. :-D

". However it will be difficult to secure ropes / braids to an end cap without letting any slack through your knot. "

If you know your knots that´s no problem. Fibers are good for converting range of movement into
pulling force exponentially while
at the same time exponentially removing
error due to slack from the equation.
It´s called a wire rope and it´s
thousands of years one technology.

I'm currently working on making better beams and pillars (under the name hiroe on thingiverse) and was wondering if anyone had any ideas for alternatives to the pin and hole that forest says are fragile.

I'm also wondering if post tensioning is necessary at this scale. my though is to use string to make a small tension at the edges between shapes. basically tying them together under tension instead of going all the way through. Having no physics or engineering background and never having dealt with post tensioning I don't know if this would be significantly weaker or not.