A few days ago, I got notice from Alexander at Netfabb that I could download a copy of Netfabb

This weekend I've been working with the new Netfabb for Rapman Basic beta. I'd ordered the Pro edition with upgrade to generate gcode for my Rapman 3.0, but it appears that another month or two is needed for that to be ready, so Alexander kindly gave me a copy of Basic to play with.

This weekend I refurbished my Rapman for ABS with a new 9.5 mm acrylic print bed so that I could print ABS and PLA again.

The big problem I had with Basic is that it is set up for a 0.5 mm extruder orifice while I am using a 0.3 mm. Charly at Netfabb kindly showed me how to sort that out this morning, so now I am printing the Pink Panther Lady STL that I downloaded from Thingiverse. 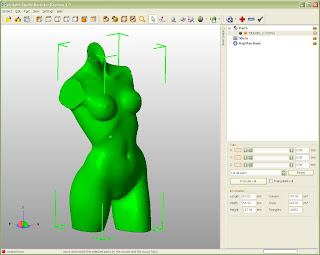 The new calibration that Charly helped me with is working pretty well. 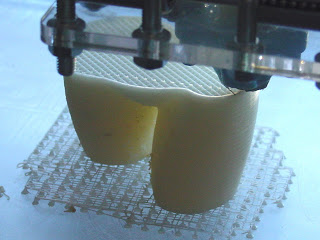 There is a little ripple offset in the print layers that I estimnate at 0.1-0.2 mm that I'm guessing is caused by some sort of truncation error either in the Basic app or in the Rapman firmware.  I hope to get to the bottom of that problem in coming days.  Other than that, the print quality of the Basic beta app is brilliant.


The new raft technique that Netfabb has confected is also brilliant.  They basically print a matrix of candy kiss shaped pillars and then print a flexible net over them that is connected only at the edges of the matrix.  That enables the print, the naked lady in this case, to shrink safely without warping.  It is a REALLY elegant solution to the perennial warping problem that we've all faced for years. 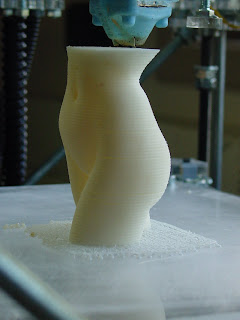 I noticed that the torso started breaking free from the raft webbing when the print was approaching the 100 mm z axis milestone.  The print was working on the connection between the right arm and the shoulder and this started catching when the perimeter was being printed and slowly broke the thighs away from the webbing on top of the pillars.  I put a caliper against the torso to counteract the movement. 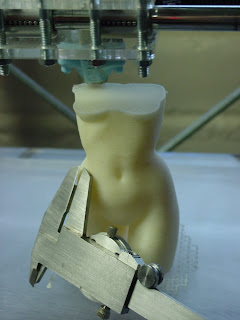 That solved the problem for several more print layers. 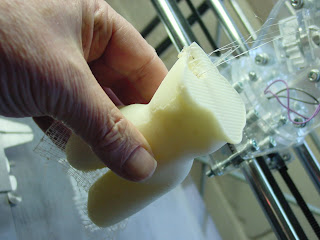 The torso finally snagged on the print head and moved at a diagonal burying the hot extruder head into the infill and ruining the print.  The failure occurred precisely at 100 mm, raft not included. 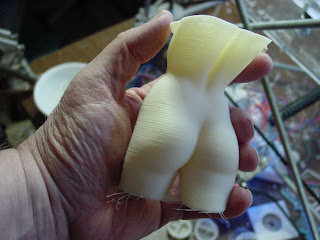 Aside from the slight layer juddering {expansion and contraction}mentioned before, the print quality was quite high.

Posted by Forrest Higgs at 3:13 PM

That is a very common point on ppw to fail. the height virsus the base width tends to be a issue plus it starts laying full fill layers because of her chest overhang and those tend to bind on the nozel creating a moment of torque. so far i have only had one successful print of her (THAT MY DOG DECIDED TO EAT) but i have printed a bunch of 1/2 size ones well.

oh got my answer, hope it could be implemented in a free/libre way