Making a lid for a potentiometer mounting box

In which your narrator shows you a few tricks of the trade with thin-walled prints.


In my telepresence robot hand project I'm not using off-the-shelf servomotors but rather making them from scratch. A servomotor basically consists of a gearmotor, a potentiometer and some electronics, in my case an MCU.

I'll not go into detail about the design of the box itself but rather cover the trick one uses to design the lid for the box. Here is the box.

The mounting box is nothing special.  It's a simple square box with mounting rack groves in the sides, seating for the potentiometer and screw posts to secure the lid. 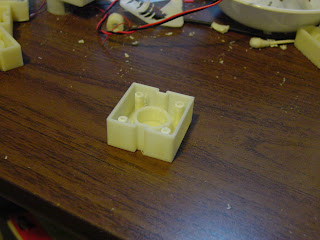 The box is simple to design.  It took me about seven design iterations to make everything fit properly and to get the proportions worked out.  Using the Reprap 3D printer at every step meant that it was a very low risk exercise.

The box itself in Art of Illusion 2.8 was a simple box in which I'd removed the mounting slots on the sides with two boolean ops. 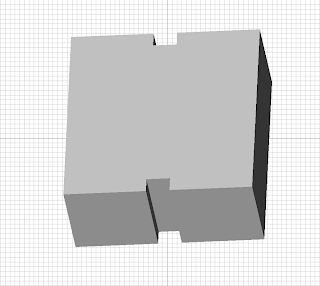 Once that was done I simply removed the voids where the potentiometer would be seated and where the mounting screws would be fitted.  I've switched Art of Illusion over to wireframe mode so that you can see the voids since they don't penetrate the surface of the mounting box. 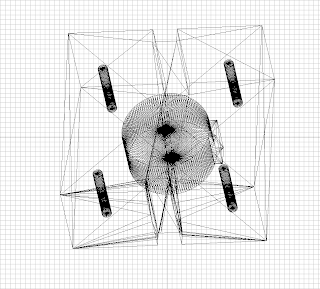 Designing thin walled parts is a bit like designing an old photographic negative.  You design the  skin of the object and the holes inside of it rather than trying to design the object itself.  When you print the object you simply don't use any infill.  The top of the box is just another kind of infill, so it is omitted, too.

Here you can see how the printed box seats the potentiomenter. 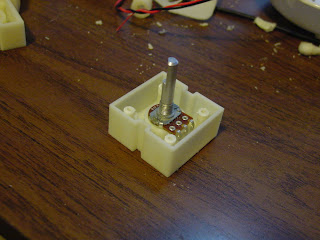 Now, designing the lid you simply take the Art of Illusion file for the box and leave out the void that seats the potentiometer. 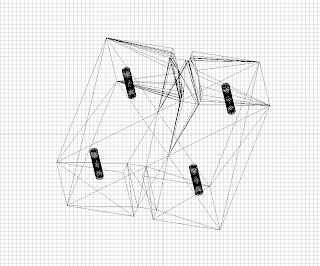 You want the lid to have holes that match the screw posts in the box so you leave those voids in.
Next you slice off the top of the box leaving the screw hole voids exposed.  You do this in Art of Illusion by simply creating a block and merging it with the top of the box down to where the screw voids begin. 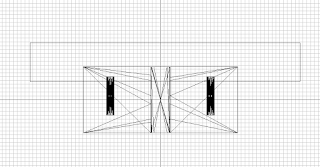 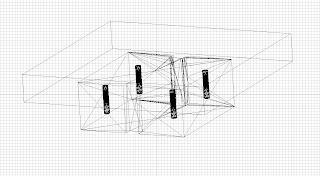 Then you remove the top of the box using Art of Illusion's boolean ops function. 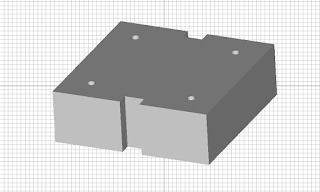 While you don't want to have a hole big enough to slip the whole potentiometer through, you do need to accommodate its shaft.  A simple way to do that is to simply take a copy of the seating void cylinder and put it back into the object as a solid rather than a void. 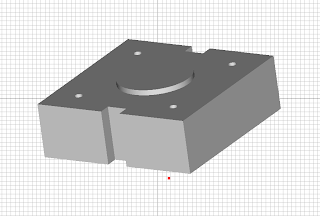 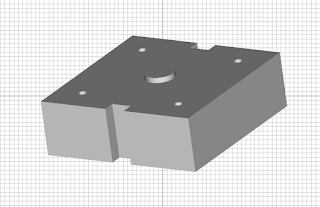 Now do a boolean op to remove that cylinder so that you there will be a hole in your lid. 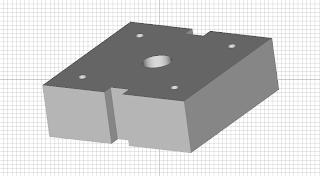 When I looked more closely at the potentiometer I noticed that there was a little metal tab on one side to act as a stop to keep it from rotating around its shaft.  I had to design a little slot into the lid to accommodate that tab.  I did that by simply locating a little block where I wanted the slot to be. 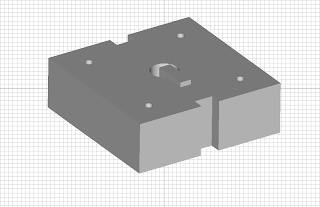 Then I did a boolean op to remove the space occupied by the block. 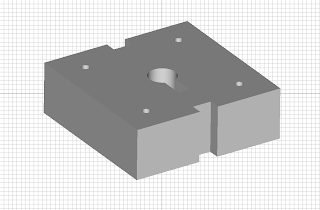 At that point I brought back the cube I used to slice off the top of the box and moved it down so that exactly the thickness of the lid was exposed.

I then did a boolean op that chopped off the bottom of the box so that only the lid remained. 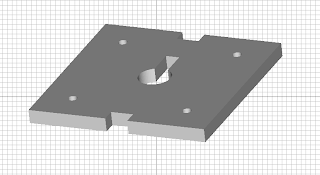 At this point I discovered that I'd made a mistake.  I'd designed the hole in the lid so that it fit the shaft.  Actually, the shaft fitted into a seating hub in the potentiometer that stuck out about a millimeter.  I brought back in the shaft cylinder that I'd used a moment ago and widened the radius to a bit over the radius of the hub. 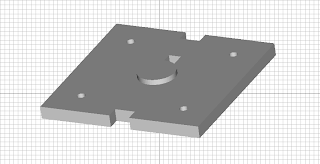 I then removed that cylinder via a boolean op which widened the hole to accommodate the seating hub.

Now comes the tricky part.  The lid as designed will sit on top of the box.  I want it to recess into the box.  I could try to do this using Art of Illusion, but there is a much simpler way much less likely to fail.

Remember that the box will be printed without infill.  In this particular case we will print it with two 0.8 mm print roads describing the perimeter with a thickness of 1.6 mm.  Print roads tend to be rounded on the inside of the box, a fact that makes working them with Art of Illusion a bit messy.  It is easier to just process the  lid in Slice and Dice.

Once you've done that you simply go into the Filled folder and pull out the image of the print roads for the lid. 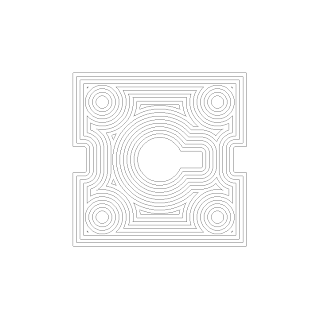 In the present state of development of Slice and Dice with complex prints roads like this it is necessary to go in with Windows Paint and clean up the print road image a bit.  Here you can see a few flaws in the roads image. 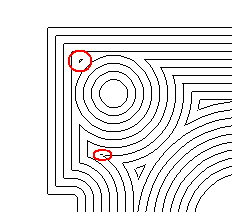 I've circled two of the most obvious.  In the upper right hand circle we have a feature that is less than 1 mm in diameter.  The lower circle encloses a loose print segment that is too small to print.  It's best just to remove those in Paint.  You will also, when inspecting the print, note that several of the print road loops are broken by a missing pixel or have tags of pixels hanging on.  Those should also be fixed or removed.

You usually only encounter this kind of problem on slices with very complicated print roads.  That's not a big deal and it is a quick thing to fix in Paint.  Since Slice and Dice processes images rather than arrays of numbers at each step you can go in and make changes with Paint if there is some flaw that you want to fix.  You can even alter the print roads in Paint if that suits you.

Altering print roads is exactly the trick we will be using to make the lid recessed.  The box has a perimeter of two print roads.  We simply go into Paint with our lid and erase the outer three print roads. 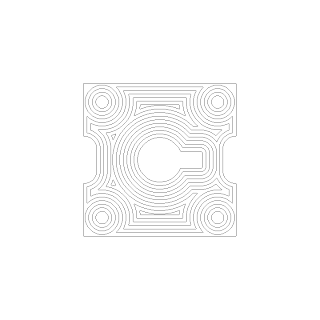 That lets the print box lid fit into the box and sit atop the screw posts inside.  We could have simply removed two.  In practice, however, that requires a bit of touching up with fine grit sandpaper on the edges to get the lid to fit.  Removing three roads leaves a 0.8 mm gap between the box and the edges of the lid.  That's good enough for this job.

Here you can see the potentiometer box with the newly printed lid lying beside it. 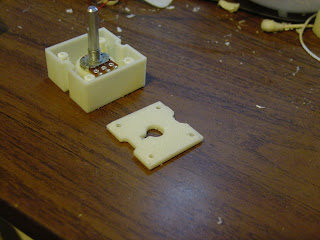 Now you can see that the lid fits nicely over the potentiometer. 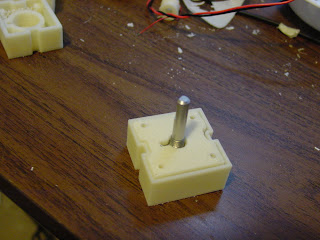 After that it's a simple matter of securing the lid with metal screws and putting on the potentiometer's washer and nut to complete the job. 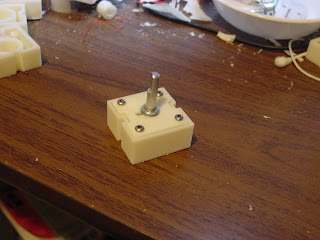 Now you check the fit between the potentiometer box and the hand segment. 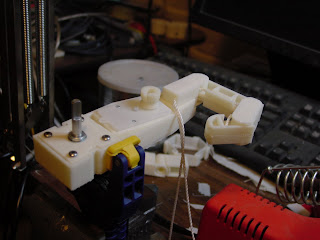 You are now ready to connect your potentiometer box onto the back of the hand segment with boolean union ops in Art of Illusion and then print out the resulting large part.

This is how you create a large complicated part by designing it as a set of smaller, simpler parts.

You never cease to amaze me! I followed you back in the Tommelise days. I really learned a lot from those experiments. Now I'm learning even more about the design process, which I hope to start doing more of eventually. As always, thanks for the blogging!

Stand by to be even more amazed, or more likely horrified. I've thrown out that whole design and am doing another approach.

How long did it approximately take you to model the piece in AoI? We are hacking together a simple solid CAD and this seems like just the type of piece that should be easy to design with our software. I'd love to have a benchmark from someone who is really proficient with AoI.

It wasn't much trouble to design the box. Testing the pieces for actual fit was the problem, Kai.