Yesterday, klaszlo, a member of the Rapman users' group wondered how he could get spares for the gear pair on the Rapman 3.0. For many of us, the whole point of Reprap machines is to print our own spares rather than tormenting Ian at BitsFromBytes every time we break something.

Did somebody already designed (ready to print) replacement gears for the extruder?
I think the gears are big enough, that we are able to print them out...

As it developed, nobody had. I wondered how hard an exercise it could be and decided to have a go at it.

I designed the gears as involute profile using a script I wrote some years ago for Art of Illusion rather than attempt to duplicate the spiky ones that come with the Rapman. The pair had a rather odd 14:17 ratio. That done I printed them out in HDPE. 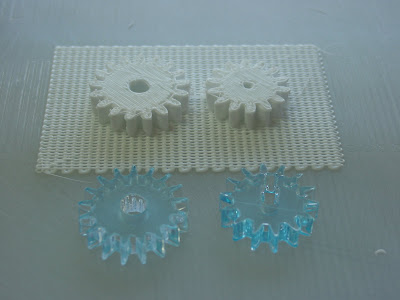 As you can see, the dimensions and tooth counts are the same. In the 14 toothed gear I used depended on a friction fit with a flat side on the 4 mm stepper shaft rather than the grub screw arrangement used in the acrylic original. 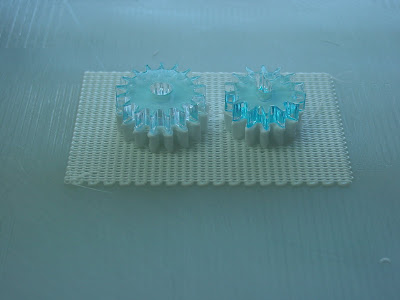 I printed the raft base at 225 C and the second layer of the raft at 230 so that it would stick properly. I also printed the transition layer between the raft and gear at 215 C. I've not had any trouble getting the raft off of the polypropylene print surface. Getting the raft off of the printed part when the transition layer is 225 is nearly impossible, however. The 215 C setting made separating the gear from the raft barely possible. I will be trying lower temperatures to find a sweet spot that makes getting the raft detached workable without special tools being required. 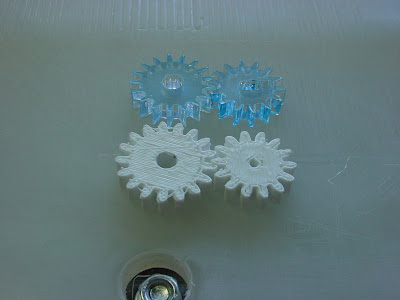 This would probably work better with an 0.3 mm extruder head. I've ordered one, but I am not sure yet how much drama will be entailed in getting it to work with Skeinforge.

That exercise got me to wondering how much drama would be involved in getting some of the other Rapman parts printed. Looking at the parts, the extruder seemed to have the most massive pieces. AK47 commented yesterday that the 125x125x10 mm text block that I printed was possibly the largest single piece printed so far. The block is big, but I don't know if it sets any sort of record. Certainly, Mendel is bound to have pieces requiring more than 59 cm^3 of plastic.

I grabbed the biggest part of the Rapman extruder and did a tracing of it to get an idea of its dimensions. Here is what it looks like. 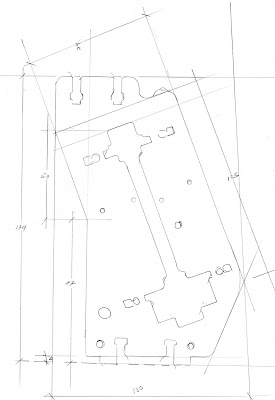 At 120x174 mm it is going to be a bit bigger than the test block we did yesterday and, once we put 15 mm of raft perimeter around it, it will pretty much occupy the whole of Rapman's print surface.

Bogdan suggested that I up the Infill Overlap Ratio from 0.3 to 0.7 to get a better fill into the teeth of the gear. 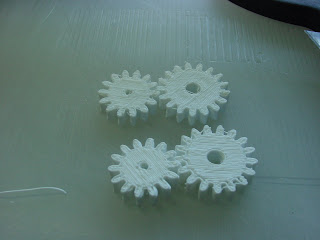 It does help. You can see the pair with the 0.7 infill overlap at the top.
Posted by Forrest Higgs at 12:38 PM

A quick question or two forest..

What is the smallest DP or module that you can print and it still work ????

I can get down to about 10 mm radius. It depends on the number of teeth on the gear. With six teeth I have got down to 7.5 mm. Much smaller than that and you haven't got room to stick a shaft through the gear.

I have a V2.0.1 BfB. My extruder has a really tiny spur gear that attaches to my GM3 clone, but my resolution is just too low to print it right to get a backup/replacement but using your code might make it workable. Do you think printed gears will handle the force of an extruder driver thats running at 3:1 instead of 14:17

Do you have a pic of what the gear looks like with some sort of scale attached so that I could see how big it is?