Getting there with herringbone rack and pinion

I finally hit a break in my day job and after sleeping the clock around beginning Friday afternoon was able to get back to my Reprap work. I'd been working with herringbone rack and pinion design and had begun writing Art of Illusion scripts to generate this kind of technology. I'd done most of the rack script a few weeks ago, but I needed to be able to design herringbone gears a bit more efficiently.

Finally, on Sunday the scripts for the racks and gears began to come together. After a considerable amount of feeling around I found that I could reliably print an 8 mm radius, 12 toothed gear. Connecting such a pinion directly to a 1.8 degree step NEMA 17 gives me a 0.25 mm/ step on the axis without microstepping. I then designed a 32 toothed gear which let me get that resolution down to 0.094 mm/step. You can see the layout here... 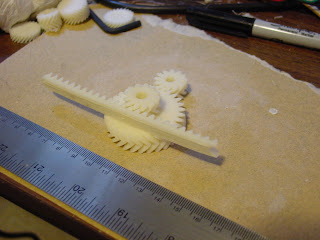 The NEMA 17 turns the 12 toothed pinion at the top of the picture.  It turns the 32 toothed gear which shares an axle with a second 12 toothed pinion which engages the rack.  It's simple, easy and quick to print and doesn't backlash if you apply just a slight bit of compression to the gear train.  My next task is to design a printable axis assembly to house it.  My goal is to get rid of the skateboard bearings, too.

The scripts are in a lot better shape, but they're still not really ready for prime time.
Posted by Forrest Higgs at 10:42 PM

Forrest, that is really great.

I guess the herringbone removes lateral play/slop from the assembly as well.

It may be necessary to have a matching Spur Gear and Rack. Particularly for a platform or gantry. The herringbone assembly will constrain one end of the drive axle so the other will have to be unconstrained laterally if it is to avoid binding.

A belt free machine, can't be far away now.

It is a shame that you can't worm drive herringbone gears. That would reduce the gear count to 2 instead of the current 3.

Yeah, that's why I chose this approach.

"It may be necessary to have a matching Spur Gear and Rack."

I'm not sure what you are trying to say here. Could you expand on that a little? I thought I'd already matched the gears and racks. Not?

"It is a shame that you can't worm drive herringbone gears"

There is no reason why I couldn't. I just haven't got around to doing it yet. It's worth noting, however, that worm gears are very inefficient.

Consider you have a gantry that moves along a pair of rails.

On one end of the gantry you will have your herringbone rack and matching pinion. (herring bone end)

The same axle that your herringbone pinion is mounted on will go full length of the gantry and drive a pinion at the other end. This far end pinion mates into it's own rack along the other rail. (far end)

The objective is that both ends of the gantry move exactly the same.

Your herring bone end is constrained from lateral movement by the pattern which is if course to design.

The far end rack and pinion though will need to have some lateral movement to ensure that if the rails are not perfectly parallel or one rail has a barely noticeable wibble in it then your gantry won't bind.

A standard spur patterned rack and pinion are just the job for this because they are not laterally constrained.

The pitch on the far end rack and pinion although of a spur pattern has to match up to that on the herringbone end.

If it doesn't one end of the gantry will always be trying to move at a different rate from the other for a given rotation of the axle.

Ummm hopes this helps rather than confuses.

I think I'm beginning to see what you are talking about. Are you fixing your pinion gear and stepper or your rack. I'd tend to fix the rack, myself.

I haven't thought much about applying rack and pinion to Darwin or Mendel. I've been thinking of using it with a delta 'bot configuration, instead. This is just part of my penchant for sniffing around into unconventional {in terms of Reprap, at least} approaches.

Umm I was talking about a fixed rack. The gantry runs up and down the rack and or track whose design is influenced by the load it needs to carry. Think of a crane in an engineering works. Sort of more Darwin like.

In terms of heresy, I have been fancying an articulated arm RepRap for a bit. It should be the least material configuration doable. It can use potentiometers as cheap hi res encoders too.

I am currently spending far too long staring at angle-poise lamps.

"It can use potentiometers as cheap hi res encoders too."

When you find a cheap, high res potentiometet link me. The ones I've found cost a young fortune. :-(

This gives you an idea...

I'm looking at a variation on the Festo delta 'bot which uses a herringbone rack and pinion instead of lead screws.

Yes precision ones can cost an arm and a leg. I was going to experiment initially with RC servos and maybe progress along to digital servos based on the open servo project's code.

The delta bots look freaky. Maybe its the speed.

More great work on the HBrack.

I still think this is the ideal method to enable the use of dirt cheap steppers for Reprap machines.

Also ideal for a 7.5deg printted stepper that might be easier to print than a 1.8deg a step one.