Years ago, I created AoI scripts to design involute profile gears and racks.  Recently, I've been exploring the notion of using rack and pinion drives instead of belts.  While it is relatively easy to design and print a rack and pinion gear set, conventional ones have a problem with lateral stability. 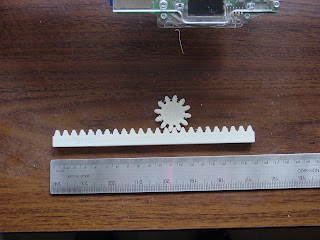 I soon found that I was buying far too many skateboard bearings to make up for this problem than was sensible.

A month or so ago, I ran across the idea of herringbone {double helical} racks and gears. You don't hear too much about this kind of gear and rack mostly because it can't be machined with conventional hobbing machines.  It can, however, be printed relatively easily.  I found that I could coax my extant rack and gear scripts to produce such components. 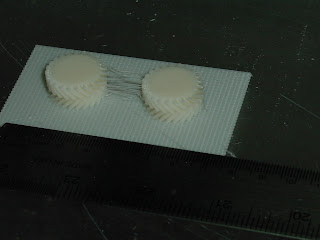 I was at, however, pretty much the limit of what Art of Illusion could handle.  By the time I converted an involute gear profile or a rack to a triangle mesh then extruded and did a few boolean ops on it even the improved power of AoI 2.8 was barely up to the job.

While I could typically make herringbone gears happen the racks were a real trial.  This had a bit to do with the fact that a rack profile does some really strange things when you apply AoIs triangle mesh routine to it.

You could extrude that and only get webbing on the outside surfaces.  As you can see, however, you get lots and lots of triangles from AoI.  I soon found that I could not make herringbone racks with more than about 12 teeth.   It was easy to see with a rack that you ought to be able to describe it with relatively few triangles, so I gritted my teeth and decided to go directly to a solid description.

Using the Platonic Solids script as a point of departure, I began to develop a herringbone rack script. 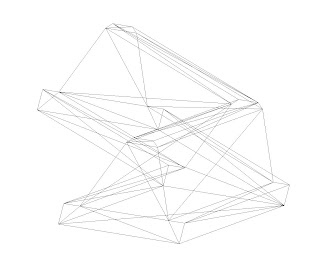 I finally got the whole thing going during lunch today. 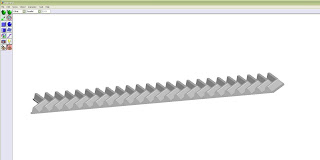 I checked the resulting STL in Netfabb and determined that it was perfect. 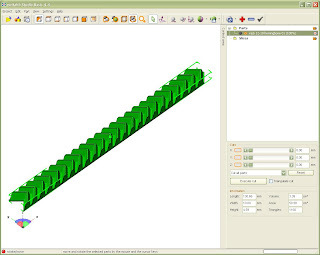 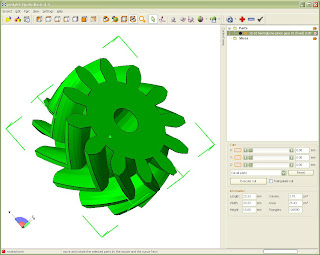 This configuration gives you about 0.3 mm/step when you attach a 1.8 degree stepper to it.  Gear that down by a factor of 3 using another herringbone gear pair and you've got the 0.1 mm/step standard Reprap resolution.

Herringbone gears are pretty much naturally anti-backlash.  They seat firmly, are quiet and have strong lateral resistance.  They're printable and there is no reason whatsoever why you shouldn't be able to use them instead of a belt.  I printed up a 130 mm rack and pinion set this evening. 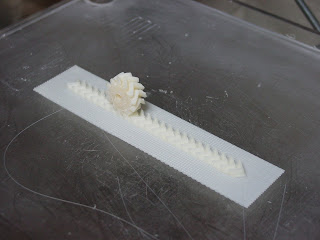 The racks can also, since they are very thin, be printed in long lengths without warping.  Using a 0.3 mm extruder orifice and printing at about 16 mm/sec I completed the rack in about an hour and twenty minutes and the gear in 45 minutes. 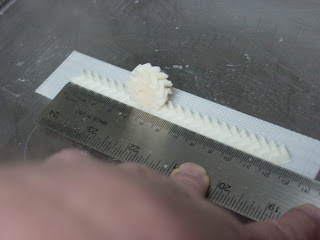 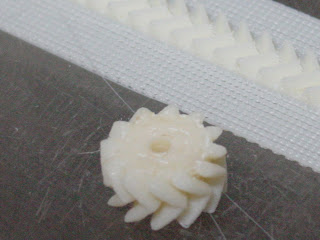 I've been able to make rack and pinion sets with gear finenesses of 24 teeth for a 10 mm radius.  That's really pushing the envelope, though.  It appears that 20 teeth for 10 mm radius is a practical limit.

I intend to clean up the rack script and write one for the herringbone gears now that I know that they work well.  I will make the scripts available as soon as I have them cleaned up a bit.

This experience has brought home what I consider a very important point for me.  We need to be looking for technologies that aren't necessarily cheap or usual in metals.  Such components are dependent on purpose built milling machines.  Our printers are much more flexible than that.  We need to choose technologies to print with that in mind.

I queued up a 267 mm rack while I was working this morning. No warping. 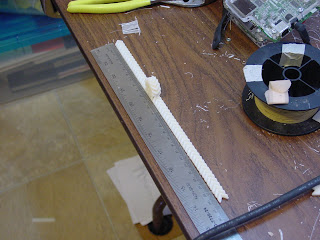 wow, thats what I call impresive.

Yes looks very promising. Rather than add more gearing x8 microstepping will give you ~0.04 resolution and smoother motion.

You didn't mention it so here it is: http://www.thingiverse.com/thing:1339

An openscad script that does helical gears also.

Anelma: Is that just my poor vision or are the teeth on those helical gears at the link you gave square? The gears are beautiful. The teeth are problematical as best as I can see. I'll be happy to share the code for making proper teeth if that is really a problem.

What is the largest gear you think could reliably be printed? I'm thinking about how I might be able to replace belt+timing pulley mechanism on my RepolaRap design with second generation parts, and a large herring bone plastic gear set would seem ideal to me; do you think it would be possible to print out a (spoked) gear 10"-11" in diameter? What is the largest you've been able to successfully print?

I certainly will share the code. Give me a week or so to get it cleaned up so that it doesn't give you a headache to use it.

Forrest, that's awesome! I've been printing a few gears with the old AOI square cog tooth script; I figure with my current firmware's problems, square is best for now, as too many short moves create problems for me. Besides, I'm hoping they'll wear down to involute over time. Hah. :)

Anyhow, would love to play with your new script!

Here's a shot of my current gears:

Wade: I'll blog it and give the download URL as soon as I have it cleaned up a bit.

What a great way foward to removing belts altogether and possibly improving the resolution &/or possibly making RepRaps work with the much cheaper 48 step steppers. may be even both better resolution & cheaper steppers.
Ink jet printers & Scanners only use the 48 step steppers so why not a Reprap?

I suppose you could do that. You'd just have to change the gear ratio into the pinion.

Nice! Yes, on a printer herringbone gears shouldn't be much harder than standard spur gears. :)

Have you read "Analytical Mechanics of Gears", by Earle Buckingham?

this is great. i was thinking of experimenting with a mendel design with a long tray and a rack and pinon system to feed it through the machine. this should make stabilizing a little easier.

Jacob: I haven't got a copy of Buckingham's book, but I suspect that I ought to buy one. For the stuff I've been doing I've been using an engineering desk reference published in the 1920's and a piece of code developed at a Swedish university a number of years ago.

LOL! When I started working with gears back in 2006, I never thought I'd get this far into them.

Just an idea to increase the length. Could you print the rack pattern as two halves. When assembled, you would offset the join. The pinion would probably just roll over each join. Would this not let you make almost any length you wanted?

Yes, I expect it would.